When I was a kid and played with Lego, I once built a truck that I intended to be for off-track driving in jungles or deserts and such. I was so proud of it that I put it on display and rarely played with it. It was black, with some spots of red and yellow. I do not know what the colour was of the truck (a Leyland Badger) that features in The Back of Beyond (John Heyer 1954), but it looked similar to my truck. I watched the film this week and it reminded me yet again of my very early fascination with Australia.

The Back of Beyond was conceived, co-written and directed by John Heyer, one of the foremost documentary filmmakers in Australia and an active film enthusiast. He was working for Ealing Studios in Australia, and participated on the making of The Overlanders (Harry Watt 1946), Ealing's most famous Australian film. (It is quite good.) In 1945 he become a producer at the Australian National Film Board, for which he produced a number of documentaries. But when he made The Back of Beyond he was working for Shell Film Unit, Australia. The Shell Film Unit had been established by Shell Oil in England in the early 1930s in order to make documentaries, not commercials, and among their consultants was John Grierson. Their first film, Airport, was made in England in 1934 and they soon became a prestigious production company, comparable to the GPO Film Unit. Now they wanted to make a film that captured the essence of Australia, and as John Heyer had the same ambition, it was a natural fit. He wrote it with his wife, Janet Heyer, Roland Robinson, and the esteemed poet Douglas Stewart. The result is spectacular. 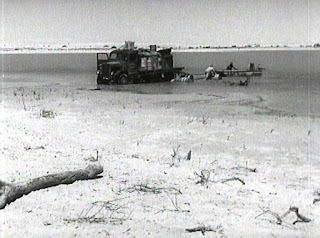 The Back of Beyond is about the Birdsville track, which runs between Birdsville, Queensland and Marree, South Australia and is about 520 kilometres (or 320 miles) long, and the film follows a man named Tom Kruse (pronounced like Tom Cruise) who drives a truck back and forth between the two towns to deliver the mail and supplies from one place to the other, and the places in between. Calling them towns is an overstatement perhaps, rural communities might be more accurate, although Birdsville has a police station (“Where the policeman can close the door of his station at sunset and write in his diary: January 22, Thomas Crow appears out of his mind. Sub-inspector King shot himself on the police station verandah. Another hot day.”) and a hotel, to which Tom Kruse is seen walking in the last shot. He has well-earned a good rest, and maybe even a hot bath.

The film begins on Marree, and the dry, barren landscape upon which it is located. An older man, originally from Afghanistan, goes out in the desert to pray and the whole prayer is translated by the narrator, Kevin Brennan, into English. The prayer sets the tone of the film; this is a tale of hardship and suffering, but also of resilience and triumph. The idea of using a Muslim man and his prayer as the lead into the film is powerful, not least for how unusual it is, now and then. The man is treated as a genuine part of Australia, and as a worthy teller of Australian tales. This is not White Australia, but Australia as a mixture of all parts of the world.

Then Tom Kruse gathers the mail and packages and drives off. During the days and nights on the road he will encounter dead cows hanging from trees to dry; an old missionary station long abandoned and in ruins; a distress call from a lone woman who has suddenly become very ill and needs a flying doctor; an old white man who lives by himself in the desert and kills dingoes for a living. He sells their dead bodies and is looking forward to his own death.

The missionary station was founded by a man from Germany, a Lutheran priest, and he lived on his mission until he died, with a large group of Aboriginals. This tale is told but an Aboriginal, who walks among the ruins and up to the priest's grave.

There are several such interludes which deviate from the tale of Tom Kruse and his truck. Another tale is about two little girls who wandered off into the desert. They lived on a farm with their parents but one day, when the dad was away, the mother suddenly died. The two little girls did not know what to do so they walked out in the desert, presumably to look for help. They disappeared and were never found again. 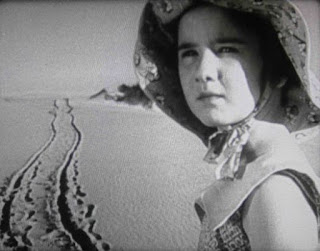 All of these stories, and the landscape, are filmed in powerful, sometimes breathtaking, images. Striking compositions of cars, trees, houses, bones of dead animals, and a persistent emphasis on the cruel indifference of the land itself. The cinematographer was Ross Wood.

The Back of Beyond was a major undertaking. It took several years to do, and it combines scripted re-enactments and more documentary-like observations. It is perhaps an essay film, and it is definitely a work of art; 65 minutes of unforgettable moments and images. "Corrugated iron towns, shimmering in the corrugated air." is the film's narrator puts it.

------------------------------------
I have mentioned Shell Film Unit before on the blog because in 1991 they made Climate of Concern, about global warming and climate change. It is a film that they now pride themselves for having made but back in 1991 the mother company shelved it because the message of the film was both bleak and clear-headed: our persistent use of oil will be our doom. Not what an oil company wants to tell the world, even if it was their own film unit who was the messenger.

The Australian National Film Board has changed names repeatedly. In 1956 it was named Australian Commonwealth Film Unit. In 1973 it became Film Australia. I think it is now taken over by Screen Australia.

Link to a lengthy discussion about The Back of Beyond from 1986 with Tom O'Regan, Brian Shoesmith, Albert Moran, and Ross Gibson. Among the references they make are Patrick White and Luis Buñuel: http://wwwmcc.murdoch.edu.au/ReadingRoom/1.1/Gibson.html
Upplagd av Fredrik Gustafsson kl. 10:00