The autumn semester lasts all the way into the middle of January and the last weeks are filled with deadlines for assorted tests and essays that the poor students have to write. I have done nothing but read student papers from morning to night for weeks on end. It is not all bad, some of the stuff has been good, but it has made it hard to write a new post here so instead of writing something lame and short for today I will just re-schedule and post something next Friday instead, and then carry on from there. 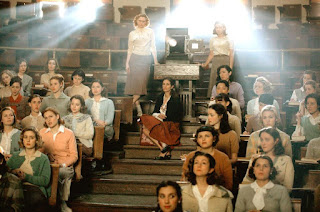 Once in London in the late 1990s I had set the alarm for some ridiculous time in the middle of the night. 03:50 perhaps? The reason was that a TV channel was showing I Died a Thousand Times (1955), Stuart Heisler's remake of High Sierra (Raoul Walsh 1941). At the time I was exploring the films of Heisler and I had to take any opportunity when something was shown because they were hard to come by.

When I was at university, studying film earlier in the 1990s, I usually asked my teachers whether I could borrow films from them, much to their amusement. One, when I begged for Billy Wilder films, asked in a slightly condescending way if I was a completist and then talked dismissively of Wilder's late career, singling out "that awful film with Jacqueline Bisset and Candice Bergen" as being especially bad. (I suppose she must have referred to George Cukor's Rich and Famous (1981).) As you can see I remember that moment well because I felt uneasy about being regarded as a completist. Was that a cool thing to be? It did not sound like it. But that was then, I have a more relaxed view of it now, and instead feel like it can be both a challenge and an enriching experience. Nowadays it is of course much more easy to find things then back when I was exploring Stuart Heisler and slowly I have been trying to fill out the gaps when it comes to the oeuvres of my favourite filmmakers, as much as possible. Last year I focused partly on Yasujiro Ozu, where the ambition was to see all the sound films I had not yet seen. That is still a work in progress, The Munekata Sisters (1950) and The End of Summer (1961) I have not been able to watch. I was more successful, finally, with Billy Wilder, as an earlier post indicated.

Jack Palance in I Died a Thousand Times.

I have of course seen all of Ekman's films and all of Bergman's films, but that was after all work. This is more of a past-time project, although I suppose everything related to film is to some extent part of my work. And I have seen all films of many contemporary filmmakers but that is not so difficult because they do not make so many films, and those made are readily available. No, the challenge is the older, really prolific ones.

Among the silent films much is lost, so I will never be able to see all of the films Hawks or Ford (or Ozu) made. But all sound films they have made would be the goal. There is one of Hawks's sound films I have not yet seen, Today We Live (1933), and quite of few of Ford's films from the early 1930s. More embarrassing is that I have not yet seen the whole of David Lean's Ryan's Daughter (1970). I watched the first half on TCM many years ago, and I liked it, but then I do not know what happened. Maybe it was too late in the evening, or maybe I was interrupted? There are also a handful of films by Vincente Minnelli which I have not seen yet; his last four films and the 1943 Red Skelton extravaganza I Dood It. And I have not seen The Skin Game (1931) or Waltzes from Vienna (1934) by Hitchcock, and there are one or two silent films of his I have not seen either. A Gorgeous Girl Like Me (1972) is the only Truffaut I have not seen, but there are several films by Michael Powell (all those 1930s quota quickies, or Honeymoon (1959), the one he made before Peeping Tom (1960) to explore, and the 1930s films by Carol Reed, and his last two. Several of Lubitsch's Germany films too. And I have maybe half of Satyajit Ray's films left. That I find particularly exciting.

This ambition is perhaps primarily for fun, but there is also an important aspect of it. It is too common that people, including committed scholars or critics, believe that the well-known films of a filmmaker are the only ones you need, and that they are the good ones. But that is not necessarily the case, there are many good films among the lesser-knowns, or unknowns, and if you are interested in the filmmaker as an artist, having seen them all really should be a goal, to get all the nuances and variations. Even failures are often illuminating.

I remember once talking to the Swedish film historian Leif Furhammar about Hitchcock and he said that the day he finally saw the last remaining film of Hitch he felt somehow empty inside, or unhappy. Before there had been the excitement of knowing that there was still at least one film by Hitchcock he had not yet seen. But now, what had he now got to look forward too? So maybe I should save a few. Maybe Hawks's Today We Live shall forever remain un-watched by me. Or maybe save it for my deathbed. Otherwise I might not be able to go silently into the night.
Upplagd av Fredrik Gustafsson kl. 09:00 2 comments: