In 1999, when The Wind Will Carry Us came out, I was writing for an online film journal and I reviewed it for them. I was particularly pleased with that review so it is a great shame that the journal abruptly went out of business and everything on the website was removed, never to be seen again. It was not just my review I felt was good, it seemed to me at the time that there were a lot of unusually good reviews of this film. I wondered if it was perhaps the case that the film had special qualities that brought something new and different from us reviewers and critics. I wonder if that is true in general, that the quality of a review or critical essay is to some extent contingent upon the film(s) being written about. Probably not, but it is an idea.

I loved The Wind Will Carry Us then, and I still do. I have just rewatched it and thought I should write about it again, some 22 years later. What has stayed with me all those years is above all else the beauty of the landscape of the area where the film takes place, in and around a Kurdish village in a mountainous area, far from anything else, somewhere between Baghdad, Iraq, and Tehran. The census of 2006 showed that it has 48 inhabitants. I wonder how many live there today, and how many of them were appearing in the film. The older ones might have died by now, and the children might have moved elsewhere. 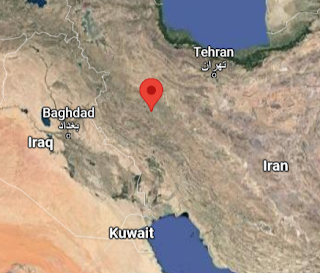 The main character is Behzad, a man from Tehran who has come to this remote village with a small crew to film a burial ceremony. Unfortunately for him, the old woman who is to be buried refuses to die, and he has to spend day after day, week after week, in the tiny village. His travails and struggles give the film a comic, absurd, quality, but this is tempered by the fact that the man is not particularly pleasant. He is demanding, insensitive, even rude. But his prolonged stay in the village does seem to change him, maybe making him a better man. 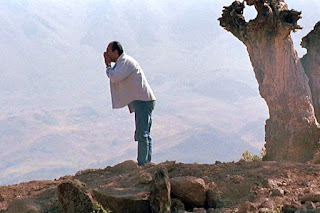 Described in such a way it sounds somewhat conventional, even cliched. There are countless films in which city slickers find themselves trapped in some rural area and either change for the better, or, if it is a horror film, get killed or at best traumatised for life. But Abbas Kiarostami is neither conventional nor cliched. He is, or sadly was, one of the greatest artists the modern world has known. And among other things he wanted to teach us to see the world in all its splendour. 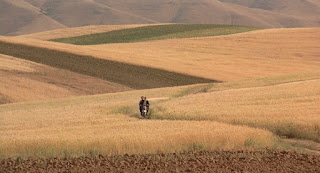 The landscape, and how Kiarostami and his cinematographer Mahmoud Kalari films it, is astonishing, and when I watch the film at home I ache because it deserves the biggest of screens. IMAX at the very least. But in this breathtaking scenery is a story of drinking tea, milking a cow, shaving (there is in particular one long scene where Behzad is shaving, facing the camera as if it was the mirror), digging, going to school, eating an apple, reciting poetry. It is a profound study of/in humanity, where all these things are simultaneously mundane and exquisitely essential and moving. Kiarostami focuses on them, instead of spelling out exactly what is going on, including basic things such as how long Behzad is actually there. We have to guess, infer, and imagine. Kiarostami is also having a lot of fun it seems. Whenever Behzad leaves town in his car to get up on a peak to get a mobile phone signal, the camera stays behind in the village and watches him drive off, and then some sheep and cows walk past the camera, as if mocking him. The first time there is even some reproductive behaviour between two of the animals, and this I find very amusing. Another amusing thing is that the crew that Behzad has brought is never seen. They seem to be asleep most of the time, although we hear their voices at times. 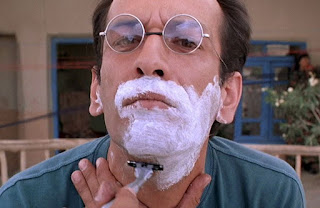 Many of these scenes are not just funny but also examples of the breakdown of the distinction between documentary and fiction. Much of what we see could be from any documentary about rural Iran. The animals are of course not acting, but what about the human inhabitants of the village? Are they all playing, or just being themselves? There is for example an older woman who has a cafe in the village, or at least serves tea. Is this what she does in real life? Are the words she speaks written by Kiarostami or is she being herself, saying what she has on her mind? In any event, she is one of those to whom Behzad tries to be superior and he is told off for it.

There are many such scenes, or perhaps it is more accurate to say that almost the entire film, as is so often the case with Kiarostami, is like that, raising the question of how we as viewers should position ourselves in relation to it. I find this a key part of what makes it exhilarating, this ambiguity about the real world and the deliberately written and staged world. In some other Iranian films this is taken to even greater lengths, and it can make the viewing experience uncomfortable, as in scenes where children are in emotional distress. (I defy anyone to watch the sequence in Jafar Panahi's The Circle (2000) where a mother is trying to abandon her small child outside a restaurant without experiencing an avalanche of conflicting emotions.) Kiarostami is not that extreme, and in The Wind Will Carry Us he is in a more playful mood despite the depths he is trying to reach.

Part of the depth comes from his use of poetry, and not any poetry but from the female modernist poet Forough Farrokhzad, which also serves as an unacknowledged connection with Iranian film history as she in 1963 made the famous film The House is Black, a poetic meditation about a visit to a leper colony in northern Iran. It is from a poem by her that the title of this film comes, although different translations of the poem phrase it differently. In another version it is for example The Wind Will Take Us Away. Her poetry is referenced several times in the film, and she has a sort of a non-visible presence in it. (You can read more about her here.) It is not just her poetry though. The equally famous Omar Khayyam is also quoted. But the spoken poetry is more than matched by the poetry of Kiarostami's vision and images. 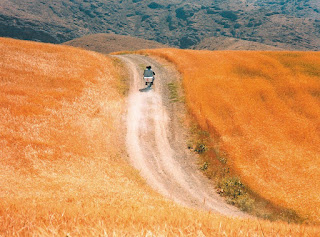 What has always puzzled me about this film is not just how it always stays with me, a constant presence in my life after I first saw it, but how it makes me feel. It makes me feel like a better person, it elevates my mood and my view of the world. It has enriched my life like few other films have. 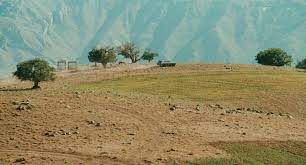