When I was a teenager, I was in love with the second and the third of the Indiana Jones films. But I had never seen the first, Raiders of the Lost Ark (Steven Spielberg 1981). Then one day when I was checking the new TV-guide for which films would be shown on Swedish television over Christmas (I have forgotten which year this was), I saw that Raiders... was to be shown on Boxing Day, i.e. December 26. Imagine my excitement. When I wrote the list of what I wanted for Christmas, I topped it by writing I wanted us to be home on the evening of the 26th so I could watch it. 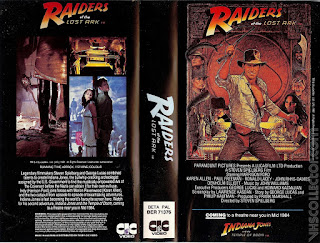 Today when the whole world is practising social distancing and staying at home, one of the things people are doing is enjoying all the streaming services that are sending films and series to our computers and TV sets. I do it too, although somewhat unexpectedly I am mainly watching Jay Leno's Garage on YouTube. But this abundance of moving images delivered in our homes reminded me of that Christmas memory, when things were not just available at the click of a button. These last two weeks when I have been spending most days almost entirely in my apartment, I have been unusually nostalgic about my teenage film watching habits.

I often wonder to what extent this constant abundance makes films and series less powerful, meaningful, and special for "content consumers" of today. Nobody has to write on their Christmas present wish list that they want to be home a particular time because it will be their only chance of watching a particular film, and I think that this is a valuable and special aspect of the appreciation of art, of our relationship to it, that might have going missing. Even though it is a myth, frequently repeated, that all is available all the time (it really is not, so please stop saying that), it is true that what is available is incomparably easier to get access to today than before. Netflix has less variety of good things than a good video store had in the 1990s, but I had to go to the video store to get my hands on the films; they did not come to my apartment by themselves.

But that effort, and the fact that you had to wait for things, that things were not instantly available, and might not be available for weeks or months or even years, was also part of the experience. And it added to that experience. If you have to travel to a specific place to get the thing you want, it will have a meaning and a value that will be missing in something that is just automatically there, without any effort. The previous way of watching TV, of each Monday at 20:00 watch the new episode of your favourite TV-series, and only then, was an important part of the experience. The current ritual of bingeing on the whole series during one weekend is something completely different. It might be convenient and fun, but I am not at all convinced that this is a good thing. It satisfies our impatient appetites, but it makes us greedy and jaded. The widespread issue of piracy, of watching films (or series, or reading books and magazines and so on) without paying for it is the most extreme example of this. Lots of people think that they are entitled to anything they want, whenever, and without paying for it. But nobody has such a right. Even though some talk about pirated films as if it was Samizdat literature, demanding that any given film is available to you just this minute is not subversive but spoiled and egocentric. It is another example of how unsustainable our current world is, its fractured and fragile social and financial structures. Everything at once at low or no cost is something people in the richer parts of the world have come to expect and demand, and that is not a good thing, because it devalues everything. It also adds to the increased strain on the environment; it accelerates the commodification of private (personal) information; and it undermines the global economy by making jobs less stable and a few internet companies overbearingly powerful and corrupt.

It is often said that nostalgia is inherently conservative or reactionary. I do not agree. A refugee from a civil war who is feeling nostalgic for her life before war broke out is not reactionary, and, on a very different scale, me feeling nostalgic over a particular aspect of my childhood is not reactionary either. It does not mean that I think the world was better then, or that I was happier. It just means that I fondly remember one small thing, regardless of the world at large. Nostalgia is not good or bad, in support of one -ism or another, or by default a wish to return to a mythical past. It completely depends on what you do with it, and what you are nostalgic about. Nostalgia can be reactionary, but it can also be a progressive catalyst for necessary change.

This belief that nostalgia is inherently reactionary is probably based on an idea of constant progress, but it is clearly not the case that everything is getting consistently better. Some things get better, some things get worse, and it is always difficult in the moment to know in which direction things are moving on a more general plane.

It might seem peculiar to feel nostalgic over scarcity, over a time when films were less immediately accessible, but since it ties in with so many other things that are wrong with the world as it is today, my memory of putting a desire to watch Raiders of the Lost Ark on my Christmas wish-list suddenly became a powerful metaphor for me.

The point is of course not that we should all stop streaming and instead sit around waiting for our favourite film to magically appear. That streamship has sailed, to muddle the metaphors. But what we should at least do is pay for what we watch, and pay for what we read, and acknowledge the people who work hard to provide these films, series, books, newspapers and journals. If a person is not willing to sacrifice something (money, time, or effort) for the thing they watch or read, it must mean that the thing has no value for them. And if it has no value, why watch it?

Samizdat refers to the way citizens in East European communist dictatorships were secretly circulating books that were banned by the state.

Some forms of piracy are valid. For example, medical professionals who lack the financial muscles to subscribe to the good journals might illicitly download an article or paper they need to better treat patients. But that is obviously not comparable to a wish to instantly watch a new film for free.

A few words about Jay Leno's Garage might be in order. I found the show by accident the other day, but it is tailor-made for me (except for Leno's tiresome references to wives allegedly being anti-car) since Leno loves the same kind of cars I love, and the cheerful enthusiasm of the show is right now very appealing to me. While I watched an episode focused on a new Aston Martin, I have been mainly drawn to the episodes that looks at older cars, such as Volvo P1800, Saab 93, Jaguar XK120, Jaguar XKSS and Chevrolet Corvette 1957. A kind of nostalgia too in a way, for a kind of older design and craft that I love. 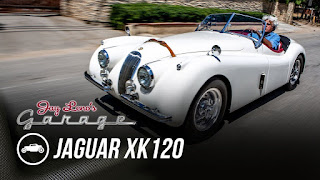 I used to have several model cars on display, but now I have only one. This type of Jaguar, but green.
Upplagd av Fredrik Gustafsson kl. 10:00