It is late July and I am on vacation. You will have to wait for something new to read here for two more weeks, Friday, August 9. See you later! 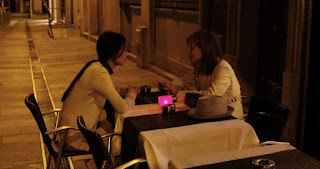 One of the exciting things about 1930s cinema is that this was a time of aviation adventures. Flight records were constantly broken, pilots became national celebrities (or celebrated writers like Antoine de Saint-Exupéry) and there was a general sense of awe and wonder around the world of aviation. The beginning of Renoir's The Rules of the Game (1939) captures this well. Many leading filmmakers were also pilots, such as Clarence Brown, Henry King, William Wellman, Howard Hawks, Tay Garnett and Victor Fleming. When the Australian aviation pioneer Charles Kingsford Smith (Sydney's airport is named after him) happened to land in Hollywood in 1935, he not only met Fleming but bought Fleming's plane.

Several of these filmmakers also made films about flying, in particular Wellman, and most successfully Hawks. There were also a few writers that contributed to several of these films, in particular John Monk Saunders and Frank Wead (known as "Spig"), who both had been in aviation themselves. One of Hawks's films about flying, Ceiling Zero (1936), was based on a play by Wead and had been suggested to Wellman and Fleming and Garnett, but they all turned it down. When Hawks got his hands on the basic material he made it his own. John Ford also made one based on a script by Wead, Air Mail (1932), but it is unfortunately stiff and awkward. A fine early film, based on a novel by John Monk Saunders, and in the Hemingway and Scott Fitzgerald mould of tales about "the lost generation", is The Last Flight (William Dieterle 1931).

I do not know whether Dorothy Arzner was a pilot but she made Christopher Strong (1933), with Katherine Hepburn as the pilot, inspired by the life of the British aviator Amy Johnson. Somewhat later Jean Grémillon made Le Ciel est à vous (1944) which was also about a woman aviator, played by Madeleine Renaud. 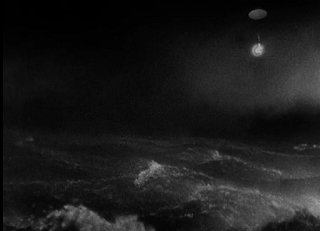 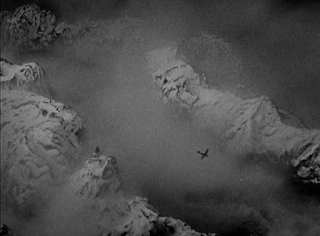 Two images from Night Flight (Clarence Brown 1933)
uneven but beautiful and based on a novel by Saint-Exupéry.

Since I have been infatuated with flying since I was young, before I got interested in films, and for a long time wanted to be a pilot, I have always been interested in these films. One of the best is Test Pilot (Victor Fleming 1938), based on a story by Wead. I seem to be in a minority there because I do not think I have ever heard anyone speak of it, and not seen it praised anywhere. (Andrew Sarris dismissed it in The American Cinema (1968).)

In 1938, Fleming was one of Hollywood's most successful and revered filmmakers. His previous film was the fine Captains Courageous (1937), beautifully made, which had been a box office hit. Test Pilot, a personal project for Fleming, had all his favourite cast and crew members, and it was he who talked them all into doing it. It is an astonishingly solid piece of filmmaking, impeccable craft, with a vivid sense of time and place. Each space that the characters inhabit feels real and lived. The aerial photography is flawless too, among the best I have ever seen. The film is so good that Hawks (Fleming's best friend) afterwards claimed he wrote part of it. John Lee Mahin, Fleming's favourite writer, who did co-write Test Pilot, said much later when he heard about Hawks's boast: "Did Howard say that? Jesus! He's a complete liar! A complete liar, bless his heart." But it is not unreasonable to think that Hawks might have contributed something, since he and Fleming were close and both were in to flying. But that is not all that interesting. 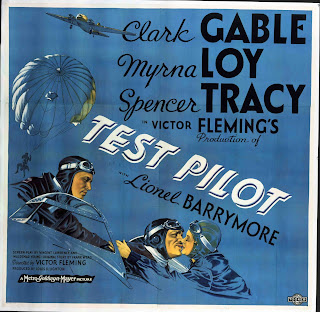 The story of Test Pilot is focused on three characters. The pilot, played by Clark Gable, his mechanic played by Spencer Tracy, and a woman whom the pilot meets early on and get engaged with, played by Myrna Loy. They are all in love, or at least both the mechanic and the woman are in love with the pilot. It is very well-played by all three, capturing all the nuances in the trio's complex relationship. 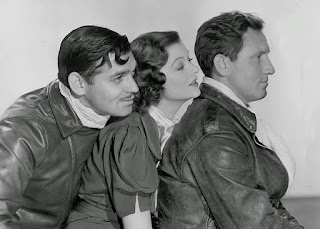 The connections between Test Pilot and Hawks's Only Angels Have Wings (1939) are many and obvious. But so are the differences. Even though Hawks and Fleming were close, they were also different in their views on life and characters. Fleming's narrative style is much more functional (or "classical") than Hawks's and the way the story plays itself out and how it ends also highlights their definitive differences. Whereas I have earlier linked Only Angels Have Wings with poetic realism, there is nothing of that in Test Pilot.

1939 was Fleming's most famous year, when he made both (the most of) The Wizard of Oz and (most of) Gone with the Wind, considerably more hamstrung than he had been before. Whatever those famous films' strengths and weaknesses might be, Test Pilot is for me Fleming's best film of the dozen or so I have seen. It is one of the highlights of 1930s cinema.

I love this scene so much.

Some facts and figures from:

It was dangerous to be an aviator. Charles Kingsford Smith crashed and died in 1935, Amy Johnson in 1941, Antoine de Saint-Exupéry in 1944. Amelia Earhart disappeared somewhere over the Pacific Ocean in 1937.

William Faulkner wrote his novel Pylon in 1935, which was adapted by Douglas Sirk in 1957 as The Tarnished Angels, so it is a late edition to this tradition.