There were at least four major American war films released in 1945, two of which I have written about here before: The Story of G.I. Joe, directed by William Wellman, and John Ford's They Were Expendable (by far the best of them). Now the time has come to consider Raoul Walsh's Objective, Burma! (The fourth is A Walk in the Sun, directed by Lewis Milestone.) It is about an Allied raid into Burma, occupied by the Japanese, to destroy a radar outpost and it is inspired by actual events, which had just taken place. The film also begins like a newsreel and occasionally newsreel footage appear throughout the film. As such it is in keeping with Walsh's journalistic impulses, which appear from time to time in his oeuvre.

But the film is of course not a completely accurate depiction of what happened. When it came out it was lambasted by the British who complained that it made it look as if the Americans won the war by themselves, with the role of the British ignored. Churchill himself was apparently outraged and the film was removed from cinemas after a week. However, this criticism is unfair because the film is not about the war at large; it is only about one small, specific mission, a commando raid. In addition, the briefing for the mission in the beginning is made by a British major, and two Gurkha soldiers and a Chinese soldier are part of the group, and they are more prominent than most of the G.I.s.

Another kind of criticism against the film has been about racism, and the depiction of the Japanese. But this criticism can also be countered. The Japanese are not depicted any differently from Nazi Germans in the war films set in Europe, and they are shown to be smart and sophisticated. But they are rarely seen at all, they are primarily shadows, striking without warning. There is one scene which is usually mentioned as example of the film's racism, and it is when one American character screams "Wipe them out, I say! Wipe them off the face of the earth." He does this after the soldiers have found some of their comrades killed after having been horribly tortured (something that did happen) and at such a time the reaction does not seem implausible. It is worth noticing that the person who says it is a tired old man, a journalist who is following the soldiers as a correspondent, and who is on the verge of a mental breakdown. His line is not cheered on by anyone, nobody seems to agree with him. And, right after the old man has said the line Walsh cuts to the face of an allied Chinese soldier, looking askance. So the film is more complex that the critics give it credit for. 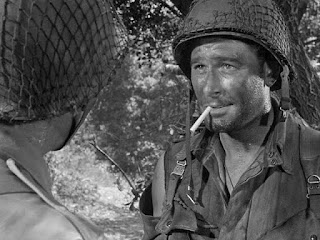 The leader of the group, captain Nelson, is played by Errol Flynn (seen above) but it is a far cry from his usual heroics and good fun. Here he is subdued, already in the first scene, and he grows increasingly weary as the film progresses. He has every reason for doing so. While at first everything is going well and they easily succeed in their mission, destroying the radar facility deep in the jungle, getting back home is a lot harder. They were able to take the Japanese by surprise at first but once they have been found out the mission descends into horror. They starve, get sick, get bitten by bugs, get stabbed, get shot, get tortured and grow increasingly restless and desperate, and it is always unbearably hot and humid. When Nelson finally is back at headquarters a senior officer congratulates him on his successful mission, which to Nelson is something of a slap in the face. In his hand he holds the dog tags from all the men he has lost (the majority of those who participated in the raid) and he says "This is what it cost."

Objective, Burma! is a Warner Bros. film, produced and co-scripted by Jerry Wald, from an original script by Alvah Bessie, but it is also one of Walsh's map movies (as Dave Kehr has called them), where a group of people have to travel from point A to B, with constant references to their maps, and where everything is focused on forward motion. The visual style is also very much Walsh's, with his impressive use of deep focus and deep space. There is always a lot of things going on in any particular shot, especially scenes at base camp in the beginning, with constant movement and action in the background of every shot. The cinematographer was James Wong Howe, one of the very best, although he and Walsh fought a lot on set, even physically. (I am not sure exactly what the creative differences were about.) Later, when the film is focused on the jungle mission the camera is always on the move, tracking left and right, back and forth, sometimes feeling like it was controlled by Sam Fuller. These aggressive tracking shots are interspersed with many long shots of soldiers in nature, sometimes barely seen at all; the humans completely engulfed by nature, like the velociraptors in the tall grass in The Lost World: Jurassic Park (Steven Spielberg 1997). Often the only sound heard is jungle sounds, without music, and this is especially effective in several battle scenes. And as is typical for Walsh, the film ends with the men high up, on a hilltop. 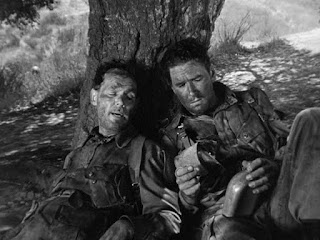 Objective, Burma! is not the best of the war films of 1945, and it is not the best of Walsh's films, but then the competition is hard. It is a fine film, and even James Agee liked it, which was unusual for him when it came to American war movies. His major problem was with the actors whom he felt did not seem genuine enough, but otherwise he was impressed.

The film feels like it was made after the war ended, as a way of taking stock, but it is worth pointing out that it was made in the summer of 1944, when the war still had one year to go. This is what is most striking about it, besides Walsh's powerful visuals. How bleak and terrifying it is. In combination with the East Asian jungle setting, this is what makes it a precursor to many films about the war in Vietnam.

The Face of Women in the Cinema of Raoul Walsh

The title of this post is inspired by the article "The Place of Woman in the Cinema of Raoul Walsh," published in 1974 by Claire Johnston and Pam Cook. I read it first long ago at university and had an idea of using it for my "Theory readings" series. But re-reading it now I realised that there is not much to say about it, it is not particularly interesting, other than to suggest that the title of it is rather misleading. A more accurate title would be "A Marxist/structuralist/Lacanian reading of The Revolt of Mamie Stover" and it is filled with juicy sentences like this one: "The Other, as the locus of the Law (e.g., the law of the prohibition of incest), as the Word (i.e., the signifier as unit of the code) is the 'Name-of-the-Father' around which the Symbolic order is constructed."

So instead I just want to celebrate a few of the women from Walsh's films. 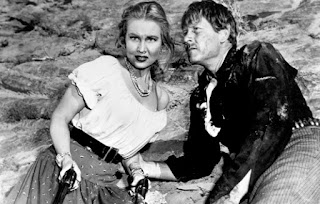 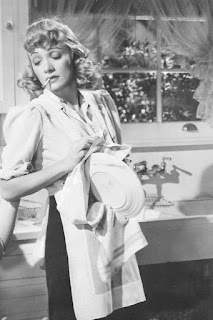 Jayne Mansfield in The Sheriff of Fractured Jaw (1958).

Jane Russell and Agnes Moorehead in The Revolt of Mamie Stover (1956). 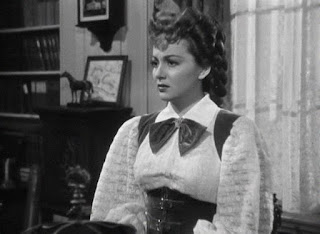 Olivia de Havilland in They Died With Their Boots On (1941). 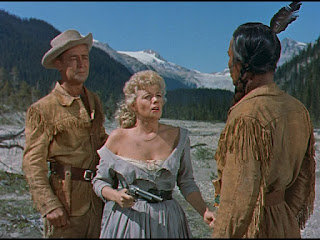 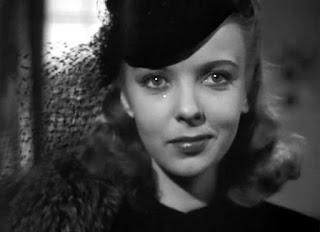