There will not be a proper article today as it is Christmas and us Swedes take that very seriously, even in a time of a pandemic. The next regular piece will be in two weeks, in 2021, on January 8.

Since I am on my Christmas break I have some free time and so far I have used it to watch a couple of the few films by Jacques Tourneur I have not seen before. A rewarding exercise and judging by the reactions on Twitter to my comments, he has many passionate supporters like myself. That too was a rewarding experience. I now have only his films from the 1930s and the two from the 1960s left to watch, and eventually I will do that too. Tourneur is a wondrous filmmaker, at least in the 1940s and 1950s. So in that spirit, here are some nice images from three of his lesser-known films. 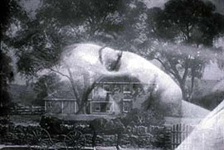 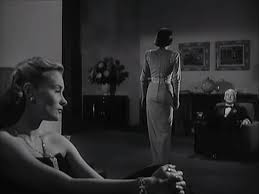 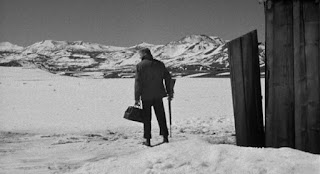 In my private archive I have an especially treasured object, a Swedish newspaper supplement from 25 January 1987 entirely focused on home video viewing. During the 1980s, the number of households that had a VCR went from a few to a majority in many countries, so in 1987 it was possible to have such a supplement. The video, both as a way of watching and as a cultural phenomenon, was at its peak. As followers of this blog probably know, this is a subject that brings out my feelings of nostalgia like no other.

The supplement is not the oldest item I have saved, I think an issue of something called Filmjournalen from 1985, when I was ten, is the oldest piece. But this one is more fun. 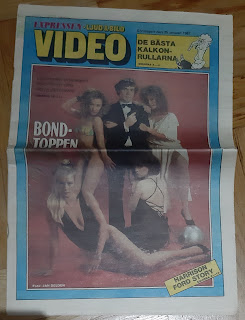 The reason I saved it, it is safe to assume, is because several pages were about James Bond, with short reviews of every film, and personal anecdotes from various journalists, especially about Sean Connery. As this was a time of my life when watching Bond films was one of my most common activities, it had to be saved for prosperity. Now the Bond material is no longer what interests me most but the whole paper itself, as a snapshot of what was hot and what was not in 1987. To give you an idea, I felt like it would be fun to tell you what they wrote about. A niche interest for sure, but it is my blog after all.

There are articles on a large variety of topics, and it begins with one about the worst films ever made, as suggested by the turkey on the cover. The chosen ones are Barbarella (Roger Vadim 1968), The Food of the Gods (Bert I. Gordon 1976), The Incredible Melting Man (William Sachs 1977), Tentacles/Tentacoli (Ovidio G. Assonitis 1977), Exorcist II: The Heretic (John Boorman 1977), Empire of the Ants (Bert I. Gordon 1977), Orca (Michael Anderson 1977), The Swarm (Irwin Allen 1978), Gold of the Amazon Women (Mark L. Lester 1979), and Bolero (John Derek 1984, which the trailer claims is a masterpiece). Considering that half of them are from 1977, and three others from the year before and after 1977, it does not seem like they put much time and effort into their selection. Even so, it might be a fun DVD box to have, or will Netflix step up?

Other articles look at the statistics about the most popular films in Sweden for home viewing, both over time and specifically in January 1987. Those lists are interesting as the most popular films are to a large extent the same films that are mentioned today when the 1980s are discussed. These are not forgotten ones, but titles such as Midnight Express (Alan Parker 1978), Tootsie (Sydney Pollack 1982), Ghostbusters (Ivan Reitman 1984), Amadeus (Milos Forman 1984), Indiana Jones, James Bond, and plenty of films with Eddie Murphy.

Another article wants to highlight films that have been neglected but are, allegedly, good and should be better known. Ten are mentioned, and many of these are now famous while some I have never heard of: All That Jazz (Bob Fosse 1979), Diva (Jean-Jacques Beineix 1981), My Favourite Year (Richard Benjamin 1982), The Man Who Loved Women (Blake Edwards 1983), Hundra (Matt Cimber 1983, which, by the looks of it, might just as well have ended up in the "worst films of all times" article), Under Fire (Roger Spootiswoode 1983), Utu (Geoff Murphy 1983, from New Zealand), Never Cry Wolf (Carroll Ballard 1983), Moscow on the Hudson (Paul Mazursky 1984), Hrafninn flýgur (Hrafn Gunnlaugsson 1984, it has different titles in English, including When the Raven Flies and Revenge of the Barbarians, but the first is the more appropriate one), Racing With the Moon* (Richard Benjamin 1984), Sixteen Candles (John Hughes 1984), and One Crazy Summer (Savage Steve Holland 1986).

Another article is about the then-hot topic of censorship, and others look at the films of Jack Nicholson and Meryl Streep, concert films, the economics of rental, and some foreign correspondents' reports from video stores around the world, including Video Shack in New York. There is also an interview with Harrison Ford. "I am aware that I am not handsome," he says, which is an odd thing to say when you look like Harrison Ford.

A recurring item on several pages is a famous Swedish film person's list of his (yes, only men have been asked) favourite films. These are the ones Lasse Hallström picked: C'eravamo tanto amati (Ettore Scola 1977, We All Loved Each Other So Much is the most known English title, and I should add that while Scola is not that well-known internationally, he was exceptionally popular in Sweden), Eye of the Needle (Richard Marquand 1981), Kramer vs. Kramer (Robert Benton 1979), Amarcord (Federico Fellini 1973), Postřižiny (Jiří Menzel 1981, sometimes called Cutting it Short, and sometimes Shortcuts), Loves of a Blonde (Milos Forman 1965), Heaven Can Wait (Warren Beatty 1978), Annie Hall (Woody Allen 1977), The Purple Rose of Cairo (Woody Allen 1985), and Den enfaldige mördaren (Hans Alfredson 1982, a famous Swedish film that was also one of Ingmar Bergman's favourites.) These films might not mean much if you are only aware of what Hallström has made in Hollywood, but they do tie in quite well with what he did in Sweden in the 1970s and 1980s, except for Eye of the Needle.

That was most of what was offered. In short, it leaves nothing to be desired. The complete supplement. I now feel compelled to watch all of the films I have not seen, and sometimes never heard of anywhere else. Maybe you got some ideas too. Most films are forgotten by time, and by revisiting magazines, newspapers, diaries and such you will be reminded of what has been forgotten, and will often get a more accurate idea of the past than from a film history book written today.

*I got the title wrong initially.