Not that long ago, the Ukrainian city of Mariupol had approximately 430 000 inhabitants. That was before Russia began its invasion and initiated its genocidal campaign against Ukraine. (Is it genocide? Some links to discussions below.) Now nobody knows how many people are still left in that city, but because of the Russian method of war, the wholesale destruction of civilian areas and infrastructure and mass killings of young and old left behind, it is a fact that many, maybe most people, have either fled or been killed; some estimate that up to 30 000 might have been killed in the city, which is now occupied by the Russians, but it could be more and in any event it is not over and people continues to be killed.

Mariupol has a special place within film history as it is where Little Vera (1988) was shot, and where it is set, although the city was called Zhdanov then. It was directed by Vasili Pichul, who was born in Mariupol, and written by his wife Mariya Khmelik. I do not expect many of you to have heard of this film, but while I was too young to watch it when it came out, I remember that occasion well because it was a sensation. Little Vera was a hip, topical film from the Soviet Union about young people giving the finger to the system, to the older generation, to communism. Such films were rare in Soviet at the time, although there had been a few earlier examples such as Courier/Messenger Boy (1986) or Assa (1987). There was a new trend with a type of films, dark and even nihilistic films sometimes referred to as chernukha, about family breakdowns and societal malaise, and Little Vera can be included in this tradition. It broke box office records in the Soviet Union, over 50 million saw Little Vera during its first release, and was popular in Sweden as well. I remember the trailer, and the excitement around the film, even though I never saw it then. It also has nudity and sex scenes, unheard of in Soviet cinema, and no doubt that was also helpful at the box office.

Vera, wonderfully played by Natalya Negoda, is a teenage girl who lives with her brother and their parents. The father is an alcoholic who can get nasty and violent when he is drunk. Vera has her friend Chistyakova, and she is dating Andrei. Then he is called up and she meets Sergei. They decide to get married, on rather flimsy grounds. It is not much fun. Life is hard, the apartments are small, and the neighbourhood is worn down and ugly. Her family consists of four people who can barely stand each other but they are forced to live together because they depend on the money the father earns. But Vera has a fierce personality and an explosive laughter. In one scene, when an outdoor party is broken up by the police, she kicks one of the policemen in the crotch, several times, in order to get away. Escaping the police is one thing though, the dreariness of a life under a communist state on its last leg can break the spirit of anyone, even a fighter like Vera. 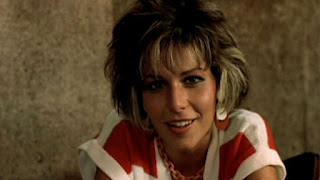 The narrative is a bit awkward and clumsy, it lacks a good rhythm, but the film is powerful just the same. The story is interspersed by shots of the Azovstal steelworks, that the current war made famous in March and April of 2022, and these shots have an eerie poetry to them, which is quite striking. 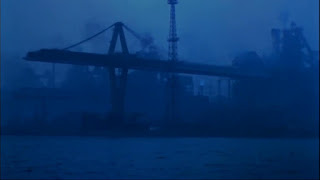 The film's relation to sex and nudity is interesting. Here for example is a poster that was used in the marketing campaign: 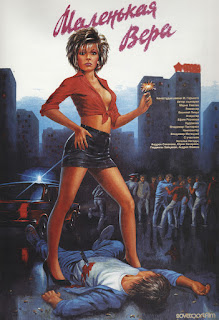 As Vera is a sad, struggling teenager and not an avenging action hero, and the film resembles Ken Loach and not Paul Verhoeven, the poster has nothing to do with the style and content of the actual film. It does however say a lot about distributors' focus, and their, probably accurate, idea of what would sell. But most people seeing that poster, and expecting something like it, would be certain to be disappointed. Natalya Negoda was however able to trade on that sexual angle, as she got to appear on the cover of Playboy magazine. And the Soviet women did take notice, and appreciate, the fact that in the sex scenes, Vera was on top of her boyfriend, showing yet again that she was a new kind of woman. She became emblematic of the rapid changes in the Soviet Union during the years of reformist chairman Mikhail Gorbachev.
Little Vera was made little over a year after Gorbachev had announced the new policy of openness, glasnost and perestroika (these are terms that are synonymous with my childhood), which also affected Soviet cinema culture. It meant that older films that had been censored and banned could now be shown, sometimes for the first time, and dark and rebellious films like Little Vera could be made. It has its flaws but it is a powerful film; you should definitely search for it.

Today the film has a certain urgency to it, as most of what is seen in it has been destroyed by Russian artillery and missiles. The whole city has become a crime scene, a crime against humanity.

Pichul never got to experience the demolition of his hometown; he died from lung cancer in 2015. Now the whole city is dying. Although knowing about Ukrainian resilience and resourcefulness, I do not doubt that as soon as the Russians are defeated, the locals will make the city flourish again. The human spirit lives on, even if it sometimes must do battle with the dark forces of fascism and vicious drunken madness.

On the question of genocide: