Should you happen to be in Durban the coming weeks, you'll have ample opportunity to watch five new Swedish films, as well as five of Bergman's most well-known films. It's the 31st Durban International Film Festival which has a special focus on Sweden, and the festival runs from 22 July to 1 August. Beware though that it's not a particularly cheerful selection. Doom and gloom seems to have been what the festival was looking for. But among the Bergman films they're showing Wild Strawberries (1957) is of course of exceptional beauty.

One of my favourite scenes from modern cinema is from the film based on Harvey Pekar's comics American Splendor. The film came out in 2003, and Paul Giamatti plays Pekar. Now the real Harvey Pekar has passed away, only yesterday, age 70. He was one of the great names in American comics, and perhaps graphic novels. He was a good friend of Robert Crumb, and this is how Crumb described him to The Plain Dealer, a newspaper from Cleveland, Ohio, Pekar's hometown: "He's the soul of Cleveland. He's passionate and articulate. He's grim. He's Jewish. I appreciate the way he embraces all that darkness."

I wonder how he was during his last days. It doesn't really feel right to say rest in peace. Would he be happy, resting in peace?

Here's a more informed posting about him, including some clips from when he appeared at David Letterman.

Here's the scene from the film version of American Splendor.

British Pathé has a web site where you can watch old newsreel footage, some as old as from 1896. I just registered today and one of the first things I found was this delightful piece. I did not know that Hitchcock was also a director of the Los Angeles Zoo.

Ah, the modern age of blogging and social networks. A week ago in an interview with the Times (of London), Woody Allen talked about his life and his career. He also, apparently just in passing, named his six favourite films among his own:

And a surprisingly large amount of people are getting worked up by these choices, because they are the "wrong" films. One example is the Guardian's film blog which says that Allen "misjudge" his films "spectacularly" and finds his "cluelessness" "weirdly endearing". Vanity Fair and New York Magazine are two other publications that are getting involved, as are of course bloggers (like myself).

But what is the problem with the list? Yes, neither Annie Hall (1977) nor Manhattan (1979) are among the chosen ones but for starters we have no clues as to what were Allen's reasons for choosing these particular films. He might have chosen them because they were the films which came as close to what he wanted to achieve as possible. Or because he had a particularly happy time when making them. Or because, today, these films are closest to Allen's view of life.

And there is nothing horrendous about those six films. I myself like all of them, they all got on average good reviews by the critics and they all got roughly the same ratings on imdb (that is the figure after the titles above). Why not compare imdb's list with Allen's:

It would appear then that Allen actually is a tune with the public mood, rather than being completely bonkers, as has been suggested by some commentators.

This is just a silly thing of course, and there is no need to waste a lot of time with it, but I think that the reactions reveal some things.

One is the way that people get emotional about it. This is a testament both to the power of films, and to the fact that it is personal. "I love these films and if you love those films, then that just proves that there is something wrong with you."

Another thing is that making lists is always a foolproof way of getting people aroused and upset. And it is probably partly due to the above mentioned reason.

Another thing is perhaps related to the phenomenon with people getting so attached to films (and books, comics, songs and so on) that they feel that they own it, that they have rights concerning those films. So when somebody, Allen in this case, is not giving due credit to these films, maybe people feel let down, betrayed even.

What is different with this list though, is that usually people complain because what are on the lists are conceived as being clichéd and ordinary. This time around the commentators are bending over backwards to be as conventional as possible.

If I had taken a guess as to what six films Allen would have chosen, I would have gone with the following:

(I cannot link to the article in the Times since Murdoch prefers to hide behind pay walls. Here is a link to the Australian instead, which admittedly is also a Murdoch paper. For an example of fans making demands on the films they love and the filmmakers who made them, why not check out the documentary The People vs. George Lucas (2010))
Upplagd av Fredrik Gustafsson kl. 10:14 No comments:

The Makhmalbaf family definitely has cinema in their DNA. Father Mohsen has been a filmmaker since the 1980s, after he sat in prison for sometime for having tried to kill a policeman. His wife Marziyeh Meshkini has made three films, one of which is the extraordinaryThe Day I Became a Woman (Roozi ke zan shodam 2000), and their daughters Samira and Hani has also made several films, Samira's being the most well known, including her first The Apple(Sib 1998) and Blackboards (Takhté siah 2000). 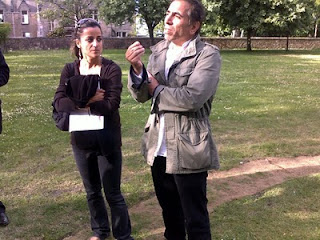 Last week I had the opportunity to talk with Makhmalbaf and his wife (see my previous posting), who were visiting St Andrews. He was, and still is, active in his support for the Green Movement in Iran. Although very much disappointed about what was going on in his home country, and the reactions from the West, whose only concern is the nuclear issue, he still had hope for the future. But what was needed he felt was a cultural shift, a move away from the religious mindset of the present. In a sense you might say that what he wanted was for the country to do what he himself has done.
When I said that it seemed almost impossible that there could be so much filmmaking talent in one family, he said that it wasn't a question of talent. Talent is not important, what is important is passion and dedication, that you're serious about what you do. I'm not sure I agree with that, in the sense that if you don't know how to make a film, it doesn't really matter how dedicated you are, the audience will probably not understand, if they even bother to try.
Makhmalbaf has a poetic, perhaps naïve, belief in the importance of the purity of the film. He contrasted the "vulgar" Bollywood musicals with the early films of Satyajit Ray, films which, he said, captured the soul of India. I don't even know what that is, but arguably the Bollywood films of today will tell you more about India than Ray's films, even if I, like Makhmalbaf, much prefer Ray's work. (Ray is after all one of the greatest artists in cinema history.)
Now the Makhmalbafs live in Paris, and he travels around the world to fight for Iran's future. He was name dropping the likes of Bernard Kouchner and Barack Obama, and I think that he both enjoys it and finds it exasperating to have become a politician. Even though he was always political.
Among Makhmalbaf's most interesting films are Salaam Cinema (1995), A Moment of Innocence (Nun va goldoon 1996) and Kandahar (Safar e Gandehar 2001), so check them out if you haven't already done so.
Upplagd av Fredrik Gustafsson kl. 13:55 No comments: