A year of interviews - and one with Stig Björkman

2021 was a year when I started a new project: doing interviews with film critics. I have done eight so far, seven with Swedish critics past the age of retirement (even though some of them are still working) and one with Nick Pinkerton from the United States. They are all published in Swedish though, either for the Swedish Film Critics Association, of which I am a board member, or in the case of Nick for the Swedish film journal Flm. But I wanted to share something on the blog as well, so I have translated the interview with Stig Björkman into English. I choose him because, for a Swedish film critic, he has an unusual international reach as he has written in several European publications from different countries, including in Cahiers du Cinéma. So that felt like the one to go with.

The interview with Björkman is primarily about him and his career, but also a passage about Howard Hawks, whom Björkman was treating as a serious film artist already in the early 1960s when hardly anyone else in Sweden did. Links to all my other interviews (in Swedish) are also provided at the end. Enjoy!

Were you particularly interested in film already as a child or teenager?

When I was ten years old [in 1948] my parents took me to a cinema on Kungsgatan in Stockholm and we saw Luxury Liner with Jane Powell. I was completely taken by it. Powell often appeared in such MGM musicals, and I fell in love with her. I became a regular visitor and lied at home that I was studying with a friend when I actually went to the cinema. I saw everything, without distinction. My first film that was forbidden for children was Hitchcock's Strangers on a Train. I was only 13 years old then, but the usher looked the other way, a sold ticket is after all a sold ticket…

I had a weekly allowance, but it was not enough for all cinema visits, so I started working extra at my dad's office. He had a small publishing house on Vasagatan 38 and there I did small jobs that I got paid for and it helped to finance my cinema visits.

After Jane Powell, Piper Laurie was my next movie fiancée, but after I reached puberty I caught sight of Gloria Grahame, a slightly more dangerous lover. I saw her in, for example, In a Lonely Place.

I was diligent and read about movies in various magazines. I also wrote down all the movies I saw in notebooks and gave them ratings and reviews. Thanks to my father's job, I got the journal Filmjournalen for free, and of course I read it. I was so well-read I competed in the very first season of the game show Kvitt eller dubbelt on the subject of film, in 1957.

I reached the level of SEK 2,500, but then I got a question about Hasse Ekman. I was shown five stills and asked which of Hasse Ekman's films they came from. I had not seen any of these movies but managed to get four right, but I missed Som folk är mest. As a consolation prize, I received some film books written by Rune Waldekranz and a trip to visit the studio Filmstaden in Råsunda.

Did you ever think that you would like to become a film reviewer or was it more of a coincidence?

It was a pure coincidence. I actually studied to become an architect, and then worked as that for two years. The second year as an assistant to Peter Celsing who later designed Filmhuset.

When and where did you start film criticism professionally, and how did your career develop?

Bengt Forslund, who was the head of Stockholm University’s student film club, called me after he had seen me in Kvitt eller Dubbelt and asked if I wanted to join the film club. There I soon became his successor as chairman. This included the tasks of presenting the film screenings that the film club arranged in Stockholm, 12 screenings per semester, and also of writing introductory texts.

In 1959, Forslund started the film magazine Chaplin, and after five issues he called me and asked if I wanted to join, as co-editor. It was 1960 and I was 21 years old. I had never written any film reviews of any kind, but now, as co-editor of a film journal, I just had to get on with it.

In 1961 I was at the Venice Film Festival for the first time. I have always been curious about other countries and cultures, and I also knew Italian fluently.

Since then, I have been a full-time film critic and writer.

What other publications have you written for?

The Italian Cineforum, Sight & Sound and Movie in England, Filmrutan in Sweden, the Danish Levende billeder, Cahiers du Cinéma, and the Swedish daily newspapers Dagens Nyheter and Svenska Dagbladet. I was a film reviewer for SvD 1962 to 1964, and then for DN for a few years.

Being a film reviewer could be stressful because at that time there were no press screenings. You saw a film at the evening screening of the opening night and then you had to take a taxi to the editorial office and quickly write a review that must be ready no later than 10 pm, in order for it to make it into the morning edition. So often I only had an hour to do it.

This was a time of changes in what was considered good or interesting films, partly due to the influence from Cahiers du Cinéma, so I was wondering about my favourite filmmaker, Howard Hawks. What kind of status did he have in Sweden at the time?

That is an interesting question. I wrote a positive, and long, review of Hatari! in Chaplin. The other critics and editors at the journal were wondering why I put so much emphasis on that kind of film, just a run-of-the-mill adventure film. But that view soon began to change. We did profiles of various important filmmakers and a few years later Hawks was considered important enough by the others, so he got a profile too. Maybe 1964.

I better search for that review, I love Hatari! Maybe your review was the push that changed Hawks’s status in Sweden? Is the review included in your new essay collection?

No, but two other of his films, Only Angels Have Wings and El Dorado. I should maybe have included Rio Bravo instead?

Yeah, it’s the best of those three late westerns, but I love them all, even Rio Lobo.

I haven’t seen it in a very long time.

It’s an interesting film. It feels like it started out to be darker and more tragic, but it changes its tone to be more relaxed and playful. Not a masterpiece but a worthy end to his career, as there is so much Hawks in it.

Sure. Hawks is a major favourite. And his comedies too. Some will have to be included in the next essay collection. But what are some of your favourites, other than Rio Bravo?

Oh, there are so many. Only Angels Have Wings, The Big Sleep, His Girl Friday, Red River. But all of his sound films are good, A Song is Born and Land of the Pharaohs too, but a bit weaker than the others. I don’t think he has made a bad film.

I watched Land of the Pharaohs recently and it was fun but no… But Faulkner co-wrote it, that’s interesting.

Oh yes, Hawks and Faulkner is a fascinating collaboration. But I have so many thoughts on this. I would need to write a whole book.

Well, do it. I think you should. 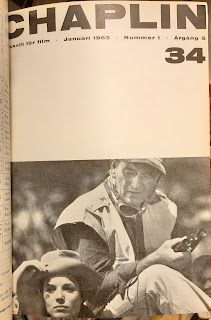 (Despite resistance from his colleagues, Hatari! made it to the front cover.)

But back to you. Have you done film criticism in other formats than written texts, for example via radio, TV, film, video essays, or something else?

Have you had any particular role models among other film critics, Swedish or foreign?

I read Robin Hood [Bengt Idestam-Almquist] diligently, and we often met. Not least on Saturdays when Filmhistoriska samlingarna had film screenings at the Regina cinema. He used to present them. He was a nice man. I also read Rune Waldekranz. Then I started reading Sight & Sound, Cahiers du Cinéma, Movie. My two co-editors at Chaplin, Forslund and Torsten Manns, teased me for my love for Cahiers.

Were they more Positif guys?

No, but Sight & Sound. But there were many who inspired me, such as Ian Cameron and Victor Perkins on Movie, their way of conducting film analysis.

Did you have a mentor or other person who helped you at the beginning of your career?

Bengt Forslund. But mostly I'm self-taught. The ones who shaped me the most are probably Cameron and Perkins at Movie. They also became good friends, and Mark Shivas. Their way of analysing and describing films influenced me the most. I also liked Jean Douchet a lot.

What do you think characterizes a good critic?

Curiosity, knowledge, and love. To really like what you do, that it's not just a job.

Are there any particular reviews that you have read over the years that have inspired you, or that you like to read again?

Is there any particular review, article, or other form of film criticism you have written / produced yourself that you are particularly pleased with?

No, not really. But I recently re-read a review of Carnal Knowledge that I wrote for Chaplin, and there I think I managed to nail it. I'm very fond of Mike Nichols and his films in general.

What are you doing right now?

I and my publisher are proofreading the manuscript for my new book, a collection of essays about 200 films. The book will be called Uppenbarelseboken, and I have already started writing a sequel to it.

In addition, I have finished two films, one is a portrait of Joyce Carol Oates, and the other is a film by Stina Gardell, a documentary of me and my film acquaintances around the world, it’s called Corona Film Club.

Links to all interviews with the Swedish critics: https://news.filmkritiker.se/tag/svenska-filmkritiker/

Link to the interview with Nick Pinkerton: https://flm.nu/2021/12/kritiska-utsikter-med-nick-pinkerton/