The autumn semester - on teaching, thinking and the utility of it

Next week I begin teaching again, after the summer break. (A summer break from teaching, not a summer break from work. The work-free phase was considerably shorter than the summer.) At the moment that means I am engaged with planning lectures and preparing clips and readings. It also means that this is the period in which I am required to read awful text books. The book I read this week, which will remain unnamed, should never have been put in front of a student, and my students will definitely be spared. I sometimes think I should start a journal devoted only to reviewing text books for film studies. Is the book accurate? Is it coherent? Is it relevant? Is it written in a language understandable by the students? Does the book have a comprehensive index? You would be amazed how many book fail these simple tests.

I will be teaching film history, except for Hollywood cinema, key concepts and a course on theoretical traditions. It will be a busy time, for me and for the students alike. Actually, I wonder for whom it will be worse, but probably for some of the students. I will keep that in mind.

Teaching for me is not just about telling the students about things they did not know about before or making them see things in a new light. It is also about learning myself, from interacting with them. Not about films, but about teaching. What works and what does not work? What are the most effective ways in getting their attention or getting them to learn, and enjoy learning? Reading those textbooks will frequently be a strain on them, but the lectures should never be. If they see them as a chore then I have failed. They should look forward to them, but not because they are easy but because they will be meaningful, as well as fun. I do not go easy on them. I can be rather demanding, and if they say things that are wrong, peculiar or incomprehensible I will tell them so and insist that they think again and try again. Here too there is a learning process in that each student is unique and treating them all the same way is not a good thing. Some need coaching, with others you need to be strict and with others the best thing is to make a joke and let them relax. Teaching is an art form, as well as a process.

But the hardest thing is to make them speak freely, and not just repeat what they have read or heard. If I show a clip their response to it will be very different if I introduced it then if I just showed it without saying anything in advance. If I tell them to look for something they will afterwards claim to have found it, but if I tell them nothing in advance and then ask afterwards what they saw I will get more independent answers. I can to a large extent control how they will watch and experience a given clip and sometimes that is a good thing and sometimes it is not. When teaching neorealism, I once showed a clip from Dirty Harry (Don Siegel 1971) and asked them beforehand to look at it from the point of view of neorealism and then afterwards analyse it as such, which went very well. One of the best seminars I have had was when I unannounced showed a clip from All That Heaven Allows (Douglas Sirk 1955) and then afterwards asked them what they were thinking about as they were watching it. That was rather amazing actually. I especially remember the student who began talking about her complicated relationship with her mother. 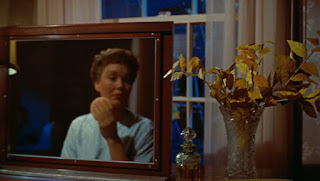 Jane Wyman in All That Heaven Allows.

What might the point be of that some might wonder. Where is the utility? Well, for one thing there is simple human bonding. These students from all corners of the world, sharing a moment together watching this clip and then expressing their feelings about it. They also learned that contrary to what many textbooks might claim, the experience of watching a film is not the same for everyone. It is a unique meeting between the individual and the film. In addition, I would like to add that sometimes something magic can happen in that meeting.

I also want them to think for themselves, and not succumb to clichés. Much thinking that we do is primarily in clichés, so not actual thinking at all, and most of our opinions are clichés as well. This might sound like I have overdosed on Hannah Arendt but it is fairly obvious and natural. It is also partly related to some things Daniel Kahneman writes about in Thinking, Fast and Slow. One of the most difficult questions to answer is the question why. Why do you think that? Why do you believe this? Why do you feel this way? Frequently people get upset when you ask them that, especially if you do so when you are having an argument, and they get angry, I think, because they have no answer. As I have argued elsewhere we often cannot explain why we think or feel a certain way, and whatever reasons we give are constructions after the fact, often inconsistent and much too simplistic. But it is not impossible, and if we actually start to think about the issues and our feelings, then breakthroughs become possible. (As a side note, when academics claim to have been "thinking things through", they rarely have.)

As you can see teaching film history and theory is for me not just about teaching film history and theory. It is also about improving my abilities as a teacher and, whenever appropriate, encourage my students to think freely and to question what they watch and what they read, and even what I tell them. This is not "critical theory" (as that concept is just an euphemism for "a certain Marxist-inspired way of thinking" i.e. substituting one set of prejudices and clichés with another) but to look at a given text, film, theory or argument and analyse/criticise it on its own terms. Is it coherent? Is it relevant? When it talks about specifics or facts, is it accurate? If it works, does it do so in general or just in specific cases? Those are some of questions (similar to the once mentioned above) that should always be asked when confronted with, for example, a specific film theory. It is also worth pointing out that unthinkingly rejecting something is as wrong as unthinkingly accepting something.

So the utility of film studies is obvious. To learn about one of the most important art forms in contemporary society, to learn about history and techniques, to learn to read and watch with open eyes and open minds, to learn how to formulate an opinion and to defend and understand it, and to learn to think freely.

At least that is the ideal scenario. Obviously I often fail in my efforts to teach but let's not dwell on that right now. 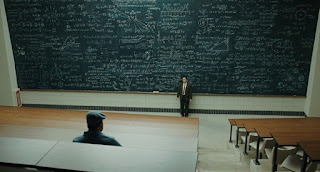 Email ThisBlogThis!Share to TwitterShare to FacebookShare to Pinterest
Etiketter: teaching

I felt like not writing a post in August and instead enjoy summer a bit more. So nothing to see here. I will be back in two weeks. 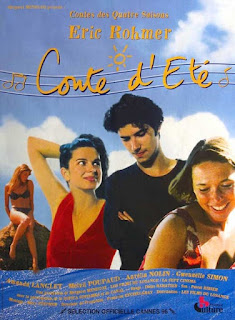