Instead of the usual Friday posting, I am this week doing a joint venture within a Swedish film blog community about Death of the Nile (John Guillermin 1978) and tradition says that these posts go out on Wednesday mornings. The screening was at the big cinema at the Swedish Film Institute, with a surprisingly large crowd. Always a nice experience. Now to the writing:

When I was a teenager I began devouring Agatha Christie's books. Conveniently a cosy shop in the small town of Norrtälje, where the family spent the summers, had a large selection and whenever we happened to pass it my dad bought me a new book. I know them well by now, and therefore I do not devour them any longer, but they do make a handsome shelf in one of my bookcases. I love several of them, such as Sad Cypress, They Came to Bagdad and Cat Among the Pigeons. Although I think her best book is Absent in the Spring, one of her novels written under the pseudonym Mary Westmacott and that are not detective stories.

There have been several famous adaptations of her books and plays. The oldest one still considered a classic is probably the American And Then There Were None (René Clair 1945). Billy Wilder did Witness for the Prosecution (1957). Frank Tashlin made The Alphabet Murders (1965), with Tony Randall as Poirot. Christie did not like it as the film is more Tashlin than her, which is undeniably true. In Britain, George Pollock did four films in the 1960s with Margaret Rutherford as Miss Marple. They have great music by Ron Goodwin but I am not convinced that Rutherford is suitable for the part. (I much prefer her as the medium Madame Arcati in Blithe Spirit (David Lean 1945).) Tashlin being Tashlin, he had Rutherford make a cameo as Miss Marple in his film, which also has music by Goodwin. But the really big ones, today still famous, appeared in the 1970s and early 1980s. They are filled with stars, have great production values and expensive location footage. There were four of them, all produced by John Brabourne and Richard Goodwin and three were written by Anthony Shaffer, including Death on the Nile. The first of these is Murder on the Orient Express (Sidney Lumet 1974), the best (according to me) is The Mirror Crack'd (Guy Hamilton 1980), and the last is Evil Under the Sun (Guy Hamilton 1982). But the second is the biggest, i.e. Death on the Nile. 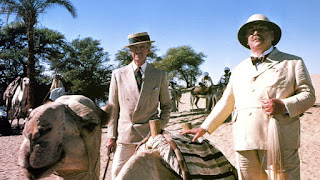 It begins humbly enough, and rather boringly, with the introduction of the main characters in England (and one in the US), and here Lois Chiles as the future murder victim Linnet Ridgeway is the centre of attention. This is unfortunate because she is a terrible actress. She is almost worse here than in next year's Bond film Moonraker (Lewis Gilbert 1979), if that is possible. But once they are all in Egypt things change, and it is no longer boring or humble. Instead it becomes something of a vulgar feast, a celebration of camp and with nobody taking things seriously. There are plenty of excellent one-liners, delivered by such pros as Maggie Smith, Bette Davis and David Niven. It is not just the one-liners and the general sense of light mockery of the conventions, it is also the characters and how they relish their ridiculous parts. Lansbury, Davis and Jack Warner in particular ham it up (as Victor Fleming would say) with obvious satisfaction, and the director John Guillermin is not one to rein them in. He is by no means a good director, but here his shortcomings work to the film's advantage. 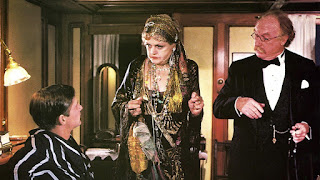 There is however a problem with the film and it has to do with Christie's central storyline. The book is not this camp or hilarious; at heart it is a tragedy. The film at times tries to invoke this, especially in Mia Farrow's wonderful performance as Jacqueline de Bellefort, one of most interesting characters Christie has ever created. But it does not sit well with the rest of the film, which has a different tone.

The film was made on location on the Nile and in surrounding areas and is shot by Jack Cardiff no less. But while the vistas are beautiful, the visual style is on the whole pedestrian and unimaginative. There are a few nice shots, such as Lois Chiles and Mia Farrow surrounded by mirrors in a scene in the beginning, and an evocative, meticulously timed, sequence among the tall pillars at the Karnak temple complex. But that is about it, visually. There is a complex series of re-enactments of the first murder, and the incident right before it. Everything that happened then is shown repeatedly throughout the rest of the film, but each time from a new angle or perspective, almost Rashomon style. It adds a dimension to the narrative, making it more imaginative than the imagery.

But while you read the book for the characterisations, Christie's psychological insights and for the thrill of the plotting, the film does not care much for any of that. Here the pleasures are other things, not least Poirot deadpanning "We know Madame Doyle was not killed by a fish." 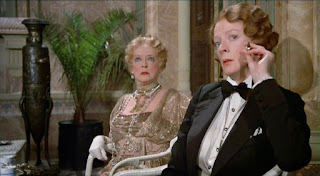 I said that I did not like Rutherford as Miss Marple, but Christie did. She dedicated The Mirror Crack'd from Side to Side to her.

While I have only mentioned feature film adaptations, there are also innumerable TV adaptations. Joan Hickson as Miss Marple in BBC's series from 1984 to 1992 is particularly good. And it is not only an Anglo-Saxon tradition. There are many French, Indian and Japanese adaptations. Some German ones too.

The status quo of happy endings

It is axiomatic that corporate-sponsored and produced media tends to be affirmative and rarely if ever challenges the status quo. The majority of Hollywood films end happily, for example. (p. 269)

Lee Grieveson's new book Cinema and the Wealth of Nations: Media, Capital, and the Liberal World System (2018) is beautifully written, deeply researched (at least judging by the endnotes) and with a clear purpose. It has some obvious weaknesses though. While it is not about fiction feature films, it does on occasion refer to such films, and the quote above is an example of the way in which it does so. All of what is said in the quote can be questioned but I want to dwell on status quo and happy endings for now, as Grieveson is not making an original observation in the quote but only repeating a common cliché.

That the majority of Hollywood films ends happily is not something that has been researched and proved. Grieveson does not provide a reference or source for his statement, not even David Bordwell's widely circulated figure of some 60% of films having conventional happy endings in "classical" Hollywood. But there is no comprehensive research. For all anyone knows maybe 53,7% of all Hollywood films end unhappily.

Part of the problem is that what constitutes a happy ending is not an exact science but to some extent a subjective feeling. If a romantic comedy ends with two lovers united and happy, and there are no complications or issues left to deal with for any of the characters in the film, then it might be considered a straightforward happy ending. But such endings are not the norm for all Hollywood films. 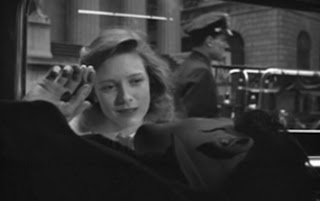 And what has it got to do with "the status quo", an amusingly vague concept? In Grieveson's context it probably means "the liberal-capitalist economic system" but what is the relation to affirmative and happy endings? If a film ends with a glorious rebellion that finally ends capitalism as we know it, and our heroes survive and prosper in the new economic system, I suppose Grieveson would call this a happy ending. Which status quo would it support?

Consider a film about a woman training for a marathon and in the end she manages to complete the race. Why would this in any way have any bearing on any status quo? A film about a child who loses her stuffed tiger in the beginning and is then happily reunited with it again in the end, would this by default implicitly argue that the only economic system possible is the one we currently have?

Those were hypothetical films so let us consider The Apartment (Billy Wilder 1960) instead. It ends happily for Baxter and Fran; the last shot is of their new-found happiness. But they find their happiness by breaking with the status quo, i.e. the rat race of corporate America. One interpretation of the film is that within the capitalist structure men and, especially, women are exchangeable commodities and for love to stand a chance you have to leave that structure, even if it means quitting your job. Is this not an ending that challenges the status quo yet is also happy, at least superficially? Another, especially beautiful, example is All That Heaven Allows (Douglas Sirk 1955). Examples like this are not hard to come by. Another thing one could consider are films about gay/lesbian characters. Historically speaking such films often ended unhappily, frequently with suicide, but when they do end happily it is because of a defiance against some status quo, i.e. the opposite of Grieveson's belief. It is possible, like in The Children's Hour (William Wyler 1961), that a Queer film ends with a suicide but is still in defiance, but I think that is rarer.

Making these arguments and mentioning these titles feels unnecessary however. The content of the opening quote are not real arguments but thought-clichés that have been perpetuated for decades. I do not understand why they are taken seriously. But the way Grieveson makes the arguments, tossed out as if they were well-established facts that we all know to be true, proves how ingrained and prevalent they are, despite their vacuousness.

One hundred films might sound like a lot but considering the period he covers is 43 years (1917-1960), when a single year could produce over 500 films, it is a small figure; only about 2.3 films per year. It does not tell us much and nothing is said about what kind of films they are, or how representative they might be.
Upplagd av Fredrik Gustafsson kl. 09:00 No comments: