It is July, the weather is nice and I am taking a break from working and writing. So eat an ice cream and wait for August when I will be back, or why not read some of my previous articles here, like these three: 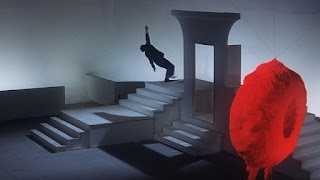 In 1943 Irving Lerner directed two short documentaries, both pretty good: Swedes in America (aka Ingrid Bergman Answers) and The Autobiography of a "Jeep". At the time he was working for OWI, the United States Office for War Information and this should not come as a surprise because during his career Lerner did so many different things in movies that it beggars belief. He made anthropological films for Columbia University. He was unofficial editor on Spartacus (Anthony Mann/Stanley Kubrick 1960) and he was assistant to Mann on two other films, Men at War (1957) and God's Little Acre (1958). He acted in a few films and he worked in different capacities with such famous documentary filmmakers as Willard Van Dyke and Robert Flaherty, sometimes as co-director. The last film on which Lerner worked was Scorsese's New York, New York (1977), as an editor. He died during the making of the film and Scorsese dedicated it to him. Lerner was also a man of strong left-wing beliefs and in 1944 he was even accused of spying for the Soviet Union. (His point man was Arthur Adams who, despite the name, was a Russian agent working in the US. Adams was actually born in Sweden, in the town of Eskilstuna, to a Swedish father and a Russian mother.) 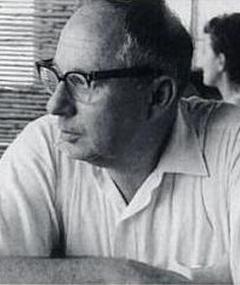 From 1948 to 1952 Lerner had been a teaching film at the University of Southern California, and then he apparently felt the time was right the start making his own feature-length films. He directed at least seven fiction films and some also list him as uncredited director on A Town Called Bastard (aka A Town Called Hell 1971), for which only Robert Parrish received credit, but I do not know what the deal is what that. I have seen only three of them, Murder by Contract (1958), City of Fear (1959) and Cry of Battle (1963), but I have read enough about the other four, Man Crazy (1953), Edge of Fury (1958, co-directed with Robert Gurney Jr.), Studs Lonigan (1960) and The Royal Hunt of the Sun (1969), to be interested in them too. His first feature, Man Crazy, was written and produced by Philip Yordan, as was Studs Lonigan and The Royal Hunt of the Sun. Yordan was also the credited writer on both Men at War and God's Little Acre, although on the first of them he was just the front for the blacklisted Ben Maddow. Maddow also was an uncredited writer on Murder by Contract. So there was a fairly tight little group. Lerner was also a close friend of Fritz Lang, to the extent that Lerner's wife allegedly wondered exactly how close they were. 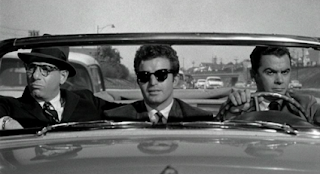 But it would not matter that Lerner is an interesting person if the films were bad, but they are not. At least not those I have seen. The most famous (comparatively speaking) is Murder by Contract, a low-budget film shot during one week and starring Vince Edwards. He plays Claude, who, unsatisfied with his regular job and impatient to fulfil his dream of buying his own house in Ohio, decides to become a hired killer. As he sees it, it is just another job, a business like any other. It is a quite remarkable film (Scorsese was of course a huge fan) and it is easy to imagine Godard watching it repeatedly. It is very tense and hardboiled, filled with eccentric details, unusual editing, handheld camera work and suggestive pans. The characters are also colourful, not just Claude but also the other people he meets. Especially the two men who are his guides when he comes to Los Angeles to do a job. (He is not particularly eager to get going. First, he wants to see the sights, gaze at the Pacific Ocean and go swimming.) In one scene Claude walks around in a gun store and is amazed by it all. What is it with all these guns? And he wonders (self-servingly) why it is that if you kill one man you are a murderer but if you drop bombs on cities, killing thousands of people, you are a hero. The film is also interesting for Claude's weird relationship to women, and it is what is to become his undoing. Murder by Contract is on the one hand pretty typical for its kind but it manages to put so much interesting stuff into its 75 minutes and is shot, by Lucien Ballard, in such an inspiring style that it is close to irresistible. The unusual score by Perry Botkin is another strength. 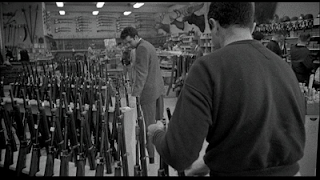 City of Fear is also a low-budget film shot in a week, it also stars Vince Edwards and is again shot by Lucien Ballard. The excellent jazz score is by Jerry Goldsmith. But despite all this the film is less special and more conventional than Murder by Contract. This time Edwards plays an escaped convict who has by mistake brought with him a metal canister with Cobalt-60, a highly toxic radioactive substance. (He thinks it is heroin in the canister, which he is unable to open.) The police are desperately trying to find him before he opens the canister and inadvertently contaminates the city, while he is getting sicker and sicker by being so close to the canister all day. He is coughing, sweating, gets covered in rashes and starts to bleed through his nose. It is a good thriller, playing on the fear of nuclear power and radiation, yet more ordinary and less visually imaginative than Murder by Contract. 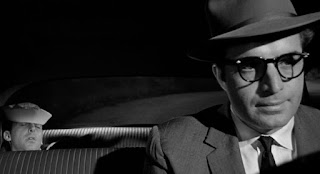 Best of the three I have seen though is Cry of Battle (aka To Be a Man). It is very different from the other two as it was shot in the Philippines and set during the second world war, and it has three big stars, Van Heflin, James MacArthur and Rita Moreno. The rest of the cast consists of Philippine actors, some of them famous locally. The cinematographer is also from the Philippines, Felipe Sacdalan (read a profile here). It tells a rather unusual story, and deals with male chauvinism and racism. The main character is David, a young American, played by MacArthur, whose father owns a plantation and who has lived a sheltered life. But when the Japanese attack the Philippines all of his old life is gone at the blink of an eye. The film begins in 1941, right after the Japanese assault, when David is attacked with some marauding soldiers. He is rescued by a Philippine resistance fighter (played by Leopoldo Salcedo) and is brought to a hut where he stays for a time with an old man and a young woman (played by Marilou Muñoz). They do not speak English, only Tagalog, so David has to learn it in order to communicate with them. But then another American appears, Joe, played by Heflin, and again David's sheltered life is shattered. Joe is deeply unpleasant, he hates the Philippine people and treat women with contempt and sexual aggression. After Joe rapes the young woman they both have to flee, and eventually get caught up in the resistance against the Japanese. But the real conflict is between Joe and David, the ugly American versus to naive and, if you will, quiet American. (The script was based on a book by Benjamin Appel and written by the former blacklisted Bernard Gordon.)

There are several startling scenes in the film, despite many lyrical passages and moments of beauty. One of the resistance fighters that they met is a woman, Sisa, played by Rita Moreno. (Moreno was from Puerto Rico, but in the film she plays a Filipina.) David falls in love with her but Joe, obviously, treats her like a sex object, and she is accustomed to have to play along with the men to stay alive. In one scene a jealous David screams "You're a whore!" to her. She is silent for a moment and then she strikes back. He knows nothing about the world, and what it takes to survives, she points out. He is just ignorant about the evils she has to face. And what is he, Sisa asks. Considering how he survives, is he not a whore himself, if she is one? He does not know how to respond to that, unable to handle her justified combination of weariness and anger.

I will not give away the ending, but that too is pretty powerful. Cry of Battle, with its strange lyrical visual style, harsh subject matter and interesting politics, can stand alone but it is also an interesting companion piece to John Ford's They Were Expendable (1945), which is also set in and around the Philippines. But in Ford's film the focus is only on the American soldiers, not on the people who actually live there. Ford's film is artistically superior but Cry of Battle is rather special too.

Lerner's close personal friend Lang also made a film about the war in the Philippines, with the clunky title American Guerrilla in the Philippines (1950). I will have to write about it too, one day. Especially since it was made for 20th Century Fox.

Here is a film Lerner made with Joseph Strick in 1948, a nine minutes long film called Muscle Beach. I do not know how to define it. 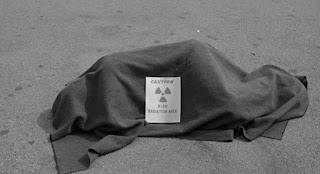