The mysteries of Howard Hawks

The headline is probably promising more than this post will deliver because the mysteries are not about Hawks but about two of his films: Bringing Up Baby (1938) and The Big Sleep (1946). The mysteries are whether the first one was a box office failure and the other is the question of who killed Sternwood's chauffeur, Owen Taylor.

Let me take the second one first. Any writings on The Big Sleep are likely to say that the plot is hard to follow, and that the death of Owen Taylor is unexplained. You can also easily find online discussions about "Who killed Taylor?" on Reddit, Twitter, and other places. The plot is said to be so difficult to follow that at one point Hawks sent a telegram to Raymond Chandler, who wrote the source novel, asking him who killed Taylor. Chandler is supposed to have answered that he did not know. (Some question whether this actually happened but in a letter Chandler wrote to Jamie Hamilton in 1949 he mentions getting that telegram so it probably happened.)

Yet in the novel it is not a mystery. Taylor was driving away from Geiger's house when he was stopped by Joe Brody, who hit Taylor, still in the car, on the head. Somehow Taylor managed to drive off, but he did not get very far before he drove into the river and drowned. In the book, the police, the D.A., and Marlowe, think that Taylor probably was disoriented, or became unconscious, due to the head injury and that the death was accidental, or maybe, although that is less likely, it was suicide. There is nothing in the film to suggest any other explanation. There is no mystery, and there is no forgotten or unknown killer. It is rather straightforward, including a confirmation from Brody that he did hit Taylor on the head before Taylor managed to drive off. 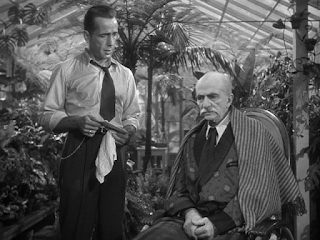 The case of Bringing Up Baby is less straightforward. It has become conventional wisdom that it was a flop and that it led to Katherine Hepburn being called "box office poison." I have dealt with the issue of box office poison in an earlier post so suffice to say here that it is a dubious and unfair accusation from an organisation for cinema theatres and not something that should be taken seriously.

If you read about Bringing Up Baby you will usually see the figure of $365,000 mentioned, the amount it allegedly lost. That is the figure mentioned in Scott Eyman's book about Cary Grant, in Barbara Leaming's book about Hepburn, and in Todd McCarthy's book about Hawks. William J. Mann, in his book about Hepburn, mentions the figure of $300 000. In neither of these four books is there a source for that figure, but the $365,000 seems to come from Richard B. Jewell's article "How Howard Hawks Brought Baby Up: An Apologia for the Studio System" published in Journal of Popular Film and Television in the autumn of 1984. (An un-sourced sentence reads " The final RKO loss on Baby amounted to $365,000.") He repeats that figure in an article ten years later in Historical Journal of Film, Radio & Television.

But what does this figure mean? The first thing to consider is that the film was not a flop in terms of expected audience attendance. Since it cost so much to make (primarily due to Hawks's expensive contract and slow filming process), in order for it to turn a profit it would have to be seen by a lot more people than the production company RKO considered possible for such a film, yet it exceeded that estimate. If you read the box office reports in the trade papers at the time there was no cause for concern. It was for example doing good business in Los Angeles, Detroit, Cincinnati, Philadelphia, Boston, Seattle, Washington, Denver, Pittsburgh, and had a strong opening in San Francisco. When Boxoffice magazine evaluated its performance about a year after its premiere they said it was doing above average. When The Hollywood Reporter in December 1938 summarised Hollywood's achievements of that year, it included Bringing Up Baby among RKO's "top grossers." The only noticeable upset was that it failed at Radio City Music Hall in New York where it closed after one week only, replaced by Jezebel (1938) which opened one week earlier than planned.

As I have written before, historic box office figures are both unpredictable and unreliable. I do not feel confident in calling Bringing Up Baby either a success or a flop. There are too many parameters and too much uncertainty concerning the figures that any film historian would be wise to be cautious. I think we should put to rest though the widespread belief that it was a confirmed flop. That Hawks complained about it in interviews is proof of nothing, and might only mean that it did not make enough of a profit for him to get a bonus on top of his already high fee.

Glancy, Mark (2020) Cary Grant - The Making of a Hollywood Career

Jewell, Richard B. "How Howard Hawks Brought Baby Up: An Apologia for the Studio System" in Journal of Popular Film and Television Volume 11, 198, Issue 4.