What is the point of what we do?

The question that forms the title of this post is something I have often asked myself, for example when I am wasting my time listening to some pointless presentation at a conference, or reading an article that has nothing to say and spends 10 000 words on whatever it is that it has nothing to say about. But it is not just the lament of a fatigued film scholar. It is a fundamental question of everything we do, whether at home, or at work, or out exercising, or engaging in politics, or scrolling through the Twitter feed. Not as a criticism of whatever it is we do in the given situation, as a variation on "Is this not really pointless?" but as a genuine wonder. "Why am I doing this? What do I hope to achieve by doing it?" We often do things just from habit, without thinking about it, and often not even necessarily taking much pleasure out of doing it, and in such situations asking ourselves that question might be a good way of breaking those habits that, even if they are not bad, might be a waste of time; time which might instead be spent on doing something that would actually give us pleasure. But asking ourselves that question when doing something that does give us pleasure might also be worthwhile, for example by making us more aware of how much pleasure it does give us, or, if we do it with a specific goal in mind, come up with ways of reaching that goal more efficiently. There is another aspect of the question too, in certain circumstances. Is what I am doing contributing to the greater good of society, to the world at large? More specifically, given the growing climate crisis, or climate emergency, am I doing what I can to minimise my role in the unfolding disaster? I think we in general need to consider, and re-consider, all that we do.
***
The other week I was reading an article by a well-known critic, in a well-known online publication, about a well-known classic film. The article had nothing new to say about the film, which is not surprising since it has been written about thousands of times over the last 60 years. What was the point of writing this new article? And what was the point of me reading it? I felt cheated.
The other day I read another article, by another writer, for another publication, about westerns, which had the exact same problems as the article about the classic. It had nothing new to say, and, like the above article, it merely enforced the conventional wisdom, regardless of whether that conventional wisdom was accurate or not. And I think it is safe to say that this is the case for much of what is being published. It is the perpetual reinvention of the wheel.
If you have absolutely nothing to add to the conversation, is it perhaps not better to not say anything? The counterargument might be that the writers got paid for it, and that this is the point of the articles. (Content created solely for monetary gain.) But if that is the only point to them, why were they commissioned? Somebody must have thought it interesting enough to pay money for it, however difficult it is to understand why.
Two obvious reasons for why there are so many pointless, or bad, or exploitative, articles published online is that the space for them is seemingly unlimited and people need money, and I think that this is a problem. Likewise in academia where you have to publish regularly, regardless of whether you have anything to say, because if you do not publish you will not get a raise, or a promotion, or maybe not even keep your job. The goal is to publish for the sake of publishing, not because you have anything to add to the sum of human knowledge or any other similar goal. Hence, we are saturated with bad and/or unnecessary writing, which is not only a drain on our reading capacity, but also part of the degradation of public life, and, as the internet is a major source of CO2 emissions, it is also bad for the environment.
I am myself guilty of this. While I try to write about things others do not write about, and to add something new to whatever I write, even if it is on overwritten subjects like Bergman and Hitchcock, I do not always succeed (my post from 2018 about Bergman's films from the 1940s was a failure in that regard). I am also debating with myself how often I should publish something on the blog. There were two reasons why I cut back from posting every week (as I did for many years) to every second week. One was that by posing less frequently it became easier to choose subjects more carefully, and the second reason was that until server centres are powered with green energy, they are bad for the environment, and each new post adds to the CO2 emissions. Maybe I should publish something only once a month?
But why do I write the blog at all? What is the point? It is because I have an insatiable desire to write, and I have had it since my pre-teen years. Since film is my main interest, and what I work with for a living, it follows that if I also write about film, I combine my two biggest interests, i.e. writing and film history. When it comes to writing, I am like Boris Lermontov and Victoria Page in The Red Shoes (Powell & Pressburger 1948): 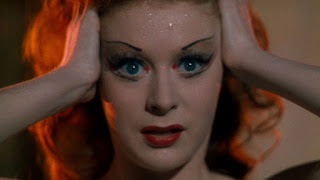 But it is a concern that the writing, the use of a computer, the streaming of films, and so on, is a strain on the environment. (On that subject, here is an article in Nature, here is one in Quartz, and here one from BBC.) Which leads to another situation when it is good to ask what the point is: while watching something on a streaming service.

Some time ago I was watching one of those reality shows on Netflix about homes, houses, interior design and whatnot, and suddenly I felt a combination of bewilderment, disgust, and frustration. There was no point in watching it. It was not strictly speaking bad; it was just nothing. There were so many things I could have done instead of watching that unnecessary series, and most of them would be better for me, and give me more pleasure. Even cleaning the kitchen would be a better use of my time. By watching that series on Netflix, I was belittling myself, and in a way showing my subordination to something that I should not give in to. Much of the output on Netflix, and many other of these streaming services, are like that. Netflix, and not least Disney, have projected a disingenuous idea of themselves as providing convenience, relatability, and progressive values, and made it seem hip, politically correct, and self-evidently obvious, that you should be home and watch yet another episode of Young Wallander or The Mandalorian.

If you take great pleasure in watching whichever series you are watching, it is not a problem. Carry on watching. But if you struggle with giving a satisfying answer to the question "What is the point of watching this?" then I would suggest you do something else. Unless physically unable to, a long walk would for example be a good thing to do instead. And even if you do enjoy the series, taking a long walk is probably still the right thing to do.

You may also ponder whether a company that thinks like this is to be trusted as an owner and gatekeeper of contemporary cinema:

“Given the incredible success of Disney+ and our plans to accelerate our direct-to-consumer business, we are strategically positioning our company to more effectively support our growth strategy and increase shareholder value,” Mr. Chapek, who succeeded Robert A. Iger as chief executive in February, said in a statement. “Managing content creation distinct from distribution will allow us to be more effective and nimble in making the content consumers want most, delivered in the way they prefer to consume it.”

Contemporary life is politically precarious and ugly, and we are living through a climate disaster. We are also living our lives surrounded by the superfluous, constantly bombarded by it, force-fed it by way of our phones, tablets and computers, but also at conferences, meetings, team-building exercises, and all kinds of events to have come to be a regular part of daily life. I think these three things (the politics, the climate disaster, the superfluous) are connected, and that they are mutually reinforcing each other.

Since some months, I do no longer use my mobile phone for anything other than calling, texting, and checking vital things like time tables or two-factor authentication. I have been cutting back drastically on my usage of Facebook. I have cleansed my Twitter feed. I have unsubscribed to almost every newsletter I ever signed up for (and some I have no recollection of having signed up for). I have stopped watching mindless Netflix shows. All from the perspective of the question "What is the point of this?" I do not any longer want to waste my time on the superfluous.

Whereas we may feel helpless against the onslaught of racism and fascism, and the disappearance of the rainforest, the coral reefs, the bees, the polar ice caps, we can still take some control of our own private lives, cut back on the superfluous, and use that time to instead do some good in this world. And if not in order to save the world, then at least to feel better about ourselves.