While produced and directed by Elia Kazan, Wild River (1960) in many ways feels like the opposite of a Kazan film. It is quiet, restrained, meandering and with a poetic touch in the use of the landscape. The river in question is the Tennessee river and the film is set right after the Roosevelt administration created the Tennessee Valley Authority (TVA) in 1933 to deal with the problems caused by the constant flooding along the rivers in the area and its costs in terms of lost land, buildings and lives. It was also part of the New Deal, to help against poverty and unemployment. One thing TVA did was to build dams to control to flow of the rivers and provide electricity to areas which had never had any. Wild River is about all that. It is also about the legacy of slavery in the South, and the continuation of abject racism in the 1930s.

It might sound like a documentary but it is a work of fiction, although it opens with documentary footage of a severe flood and a man telling a reporter how he lost his children in the river. Then the film switches to colour and to the main character, the TVA man Chuck Glover, played by Montgomery Clift. He arrives in this backward place, to which progress has not yet come, by air plane; kind, well-meaning and modern. He is not at all equipped for this old world, or so it seems at first. His primary task is to get an old woman to leave her house on a small island that will be submerged when the dam is ready. She was born in that house and on that island, and she intends to be buried on it too, like her parents and husband. She is also running the place like her own fiefdom, with a large number of African-Americans living and working there and over which she rules. So she refuses to leave. It becomes a battle of wits between Chuck and the old woman, Ella Garth, played by Jo Van Fleet.

There is also another woman, Ella Garth's granddaughter Carol Baldwin, played by Lee Remick. She is a widow since three years and now lives with her two little children and her grandmother, but she is lonely and has not been with a man for a long time. When Chuck arrives on their little island, a handsome and sophisticated man, Carol almost immediately reaches out to him and he responds in kind. Her children, a boy and a girl, also reach out to him in one of the many moving aspects of the film. They too have obviously been unhappy and missing something, without understanding it, so now when a father figure turns up they cling to him. 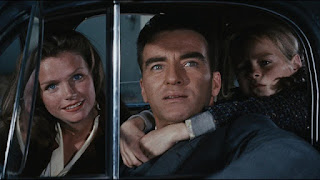 There are many strengths to the film, beyond the moving emotional undercurrents. One is the complexities of the story. In the beginning Ella Garth and Chuck Glover are each other's opposites but as the film progresses Glover is slowly becoming more of a friend, who really understands her and can sympathise with her (in that way he symbolises Kazan's own changing perspective on the story). He even has to defend her against her own family as she is eventually abandon by everybody except an old farmhand called Sam, played by Robert Earl Jones.

The location shooting is another of the film's strengths, it has a natural, earth-like texture. The cinematographer Ellsworth Fredericks has done wonders, both with interiors and exteriors. Wild River has sometimes been called Fordian, and it is understandable. The ambience and look of the film does resemble John Ford, which is another way of saying it is different from Kazan's other films. But that is not to say that Kazan is completely invisible.

The use of mist and smoke has been a hallmark of Kazan's visual style since his early filmmaking days in the 1940s. A later striking example is Blanche DuBois appearing out of the smoke at the train station in the beginning of A Streetcar Named Desire (1951). Another prominent example is on the square in front of the church in On the Waterfront (1954) were Terry Malloy has his first meeting with Edie Doyle, and later an important talk with Father Barry. It is always covered by white smoke. Wild River also uses it to great effect, like in the image below, around the raft that takes people to and from the island.

Another key element of Kazan's aesthetics is the expressive use of natural sounds, and often of subjective sound, the characters hearing things that are not there but only in their heads, and here too Wild River shines. And Kazan of course almost always addresses social and political issues, as he does her, only he is rarely as subtle as in Wild River. While a few local rednecks are clearly bad guys, everybody else operate in a more grey area. While it is inevitable that Ella Garth must leave, it is still a tragedy that it is inevitable. Tradition, progress, environmental issues, racism, politics, sex, corruption and violence; there are many subjects that appear in this film and yet it is so delicate, so relaxed and so exquisite, it is barely noticeable.

But what is noticeable is the acting, which is wonderful. Especially Jo Van Fleet. It is one of my favourite performances of all time, remarkably rich, deep and nuanced. She was 45 when she played the role, although Ella most be around 80, and she has such quiet authority and strength. But the others, like Clift and Remick, are also superb. Those two are simultaneously vulnerable and bewildered, needy and forceful.

So Wild River is a special film. It has always been the one Kazan with which I find no flaws, perhaps his only great film. It was not a success when it came out, which Kazan blamed on the poor marketing. But then it might also have been a hard film to market. But box office returns do not tell the truth about a film. Watch it and you will see.

For all of Kazan's fame for his way with the actors, in a film like Pinky (1949) it is the atmosphere and the use of sound that are the only good aspects of it. In Viva Zapata! (1952) it is Joe MacDonald's cinematography and John Steinbeck's script that makes the film, and the acting is more a weakness than an asset. Even Marlon Brando feels like an odd fit in that one.