Joseph MacDonald was usually called Joe and he was born in Mexico City in 1906. He studied mining engineering at University of Southern California, and began working as an assistant cameraman in 1921 for First National. Eventually he got a contract at Twentieth Century-Fox Film Corporation as Director of Photography and he worked there from 1935, the same year that Twentieth Century Pictures merged with Fox. 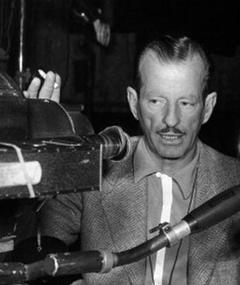 His first two films were part of Fox's Spanish-speaking productions, Rosa de Francia (José López Rubio and Gordon Wiles 1935) and Te quiero con locura (John Bolan 1935), and then he spent several years shooting more or less B-movies and serials, like Charlie Chan in Rio (Harry Lachman 1941). In 1943 he was DoP on Wintertime, directed by John Brahm and starring the Norwegian ice skating champion turned actress Sonja Heine, which might have been the first film when he was credited as Joe rather than Joseph. The mid-1940s is also when he began making more prestigious films, and when he became one of the greatest cinematographers in film history.

In 1944 he shot Otto Preminger's In the Meantime, Darling. While made shortly before Laura and so before Preminger became Preminger it is still a major film (by major I do not mean that it is a great film, it is sweet but forgettable, but a proper feature with box office potential). But his first peak year was 1946 when he shot Henry Hathaway's The Dark Corner and, especially, John Ford's sublime My Darling Clementine. The latter is one of the greatest films ever made and that is partly due to the beauty of the cinematography. Have there ever been skies as the ones in My Darling Clementine? The film has depth, character, humanity and sadness, all of the usual Fordian elements, but the look of it is even by Ford's standards exceptional. 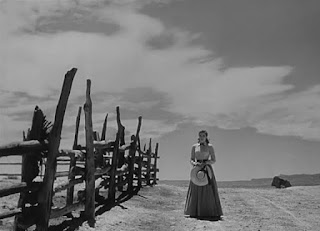 But The Dark Corner is more typical of the type of films MacDonald made for the next 10 years or so, when he would primarily shoot films that were a mixture of urban realism and film noir, like The Street with No Name (William Keighley 1948) and another by Hathaway, Call Northside 777. 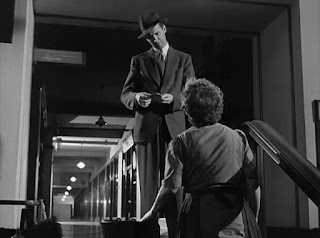 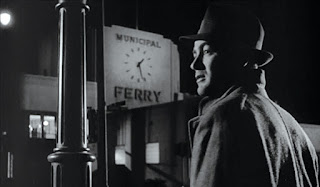 Mark Stevens in The Street with No Name

He did a fine Western with William Wellman, Yellow Sky (1948), with a very graphic depiction of the salt desert, and three films directed by Elia Kazan, where the images is the best thing about them: Pinky (1949), in the deep South, filled with Cypress trees, Panic in the Streets (1950), shot in New Orleans, and Viva Zapata! (1952), shot in Colorado and New Mexico. The usual beauty of MacDonald's images is there, combined with a very rich texture. 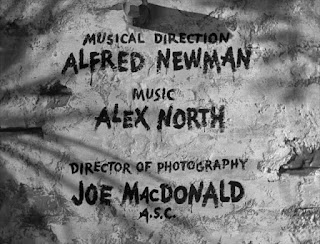 In the 1950s he turned to colour, at which he was equally brilliant. One of the most magical of Technicolor films, Hathaway's Niagara (1953), was shot by him with an almost surreal touch, both indoors and outdoors. Just look at this shot, from inside a bell tower: 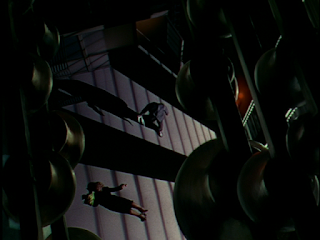 The same year he did the very first CinemaScope film, Jean Negulesco's How to Marry a Millionaire and, in a style more associated with his films from the late 1940s, Pickup on South Street, one of Samuel Fuller's best films. Fuller and MacDonald also did a couple of CinemaScope films, Hell and High Water (1954) and House of Bamboo (1955). The second one is shot in Japan, and had MacDonald experiment with Japanese influences.

He seems to have taken to the look because two years later he shot Frank Tashlin's Will Success Spoil Rock Hunter? as if it too was set in Japan. Look at the office here, it would have made Yasujiro Ozu proud:

Nicholas Ray also worked with MacDonald on two films, one of which is among Ray's absolute best, Bigger Than Life (1956). The other is the weaker The True Story of Jesse James (1957).

James Mason in Bigger Than Life

The films he shot in the 1960s are a varied bunch, for different studios. A famous, or infamous, title is Walk on the Wild Side (Edward Dmytryk 1962), one of at least eight films he did with Dmytryk. There are also some less than successful spectacles directed by J. Lee Thompson. Their weaknesses though were not the images, the splendour of which almost deserves their own post. MacDonald also shot John Huston's eccentric thriller The List of Adrian Messenger (1963) and a very fine film by Robert Wise, The Sand Pebbles (1966), an allegory of the war in Vietnam set in 1920s China. His last film, released after his death, was Mackenna's Gold (J. Lee Thompson 1969).

Films are often selected by who acts in them or who directed them, but in some cases who photographed them can also be a reliable sign. And few cinematographers are as reliable as Joe MacDonald. From 1944 onwards the majority of the films he made are worth watching, and a remarkably large number of them are exceptional. He is not as famous as John Alton, Gregg Toland or James Wong Howe, and he does not seem to have patented any innovations as many other cinematographers have (John F. Seitz for example held 17 patents). He never won an Academy Award (but was nominated thrice) nor was he ever elected president of the American Society of Cinematographers. At Fox he worked in the shadow of the great Leon Shamroy. But maybe he was satisfied with that, confident in his own capabilities? 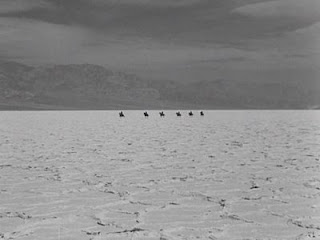 I said that In the Meantime, Darling was made before Preminger became Preminger, but it is still the case that it breaks with a taboo (by showing a man and woman in bed together), has typical long takes, and has a prominent role for an African American character, played by Clarence Muse. So while not prime Preminger there are still admirably things to be found in it. It is also Jeanne Crain's first leading role, the woman with the softest voice in Hollywood.

For the rest of his time at Fox, Preminger worked primarily with another Joseph, LaShelle, as his cinematographer.

In case you are wondering about Leave Her to Heaven (John M. Stahl 1945), it was not shot by MacDonald but by Shamroy.
Upplagd av Fredrik Gustafsson kl. 09:00