I have developed something of a passion for running; for the exercise and for the satisfaction of accomplishing something with my body, and also because it is a time of concentration, no stress or concerns, just the running. And I try to challenge myself, with running longer or faster, depending on the mood. Sometimes I get inspiration from others, like my friend Ellen who runs like a champ, or from reading books like What I Talk About When I Talk About Running by Haruki Murakami, one of his non-fiction books. Both he and Ellen run marathons but I am hesitant to do so myself because that would make running organised and objectified. I want it to be just me and my running, preferably on empty roads in the early mornings. It is a special sense of freedom and self-sufficiency.

Although there is a lot of running in films, there are not that many films on the very theme of running. As an alumni of the University of St Andrews I should probably mention Chariots of Fire (Hugh Hudson 1981), but I want to emphasis three other films in this post. The Loneliness of the Long Distance Runner (Tony Richardson 1962), The Jericho Mile (Michael Mann 1979) and Gallipoli (Peter Weir 1981). 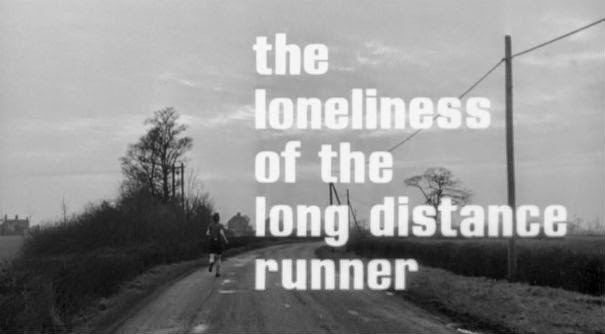 Richardson's film is an adaptation of Alan Sillitoe's short novel (which is as good as the film), and Tom Courtenay plays Colin Smith, the lonely runner. He is sent to a prison school in the English countryside where the Governor, played by Michael Redgrave, is very eager for the school to win a long distance race against another school and Colin, an angry young man, is his best hope. Running is Colin's passion, an escape from the bleak, unpromising life he lives. Each running session becomes a stream-of-consciousness where he can direct his anger and resentment towards something that gives him satisfaction. But it also gives him some self-esteem because he is so good at running that he has the power to decide whether to win or lose a race. Without that he would be a broken man, but now he has got something to hold on to.

In Gallipoli the running is less of a necessity but more a game, at least initially. As the title suggests it is set during World War 1 and about two Australian boys, the fastest runners in Western Australia, who sign up for fighting against the Germans in Europe. As so many others they see it as an adventure, and something that will soon be over. For Australians the battle at Gallipoli, Turkey, is still today something of a historical trauma, but also an event that has formed Australia as a modern state. It is a trauma because the battle was a catastrophe, a military blunder that ended in a massive slaughter of soldiers. (Every year, April 25, is Anzac Day in memory of that battle. Anzac is an acronym for Australian and New Zealand Army Corps, and the significance for Gallipoli in New Zealand is similar to what it is in Australia, as is Anzac Day.)

The two men, played by Mark Lee and Mel Gibson, first meet when competing against each other and then they walk together across the desert to Perth in order to enlist. They stop in Cairo on the way, racing towards the Sphinx, and then come to the front line which is where the fun stops and terror takes over. The film has a weakness in its portrayal of those who are not Australians, such as the Egyptians and the British, and the New Zealanders are not even mentioned; it is very much an Australian film and it feeds the myth about Gallipoli. But it is still a good film, partly because of its imagery and especially because of the final half hour or so in the trenches. The last sequence is extraordinary powerful, with the agony, tension and unbearable human cost of the war all coming together in the last shot, of a runner shot down in midstream. Here running will not save you, strong legs are no match against machine guns.

The Jericho Mile is more similar to The Loneliness of the Long Distance Runner as it is about a prisoner, Murphy, at Folsom, who spends most of the time on his own, focusing on his running. In the opening sequence everybody else is seen talking, hanging out, goofing around, but not Murphy. He is running all by himself, shutting out the outside world, escaping into himself. It is Michael Mann's first film, made for TV, and it is a powerful film because of the story and of Mann's command of space and editing and because the film is almost as focused on Murphy's running as he is. Initially he runs for himself only, as in the first sequence, but over time his running becomes a protest against the system, his way of sticking it to the man if you like, and he becomes a hero to his fellow inmates. In a prison with a clear hierarchy and racial intolerance he unites them all in an almost utopian way. Here running is a liberating force, even something transcendent. This scene says it all:

There are many scenes in this film where the emotional undercurrent is enough to make anybody cry. Its weakness is the acting, or rather Mann's direction of the actors. They come across as forced, and the timing is often off. Thief (1981), Mann's next film, is his first work of greatness but The Jericho Mile still deserves a DVD/Blu-ray launch.

Here finally is a shot from Ford's Drums Across the Mohawk (1939). It is not about running but it does have a beautiful sequence of a man (played by Henry Fonda) running across open land to get help. 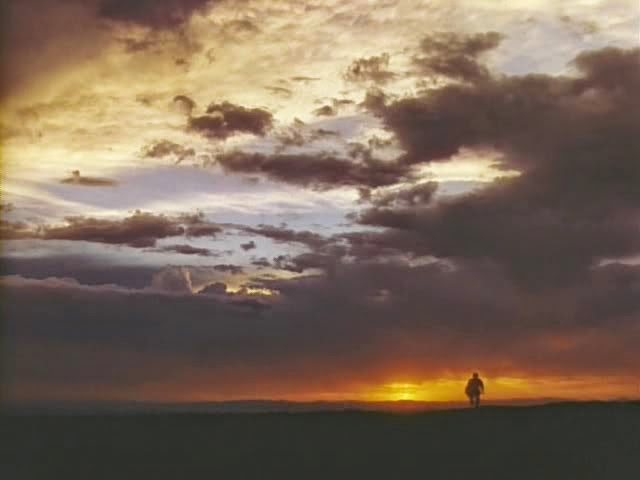