A few words about superheroes

On a flight from Bristol I sat next to a boy with severe cat allergies and when he heard, between his sneezes, that I was a film scholar he wanted to talk about superheroes and the recent Batman films. That conversation brought me back to my childhood interest in superheroes, although it was in the form of comics, not films, then. I liked The Phantom best, created by Lee Falk in 1937, but then I forgot all about it until they suddenly reappeared in cinemas on what seems to be a monthly basis since the beginning of this century. (Although it is not necessarily the case that there are more superhero films now, only that there are more good ones, or at least more noticeable.) 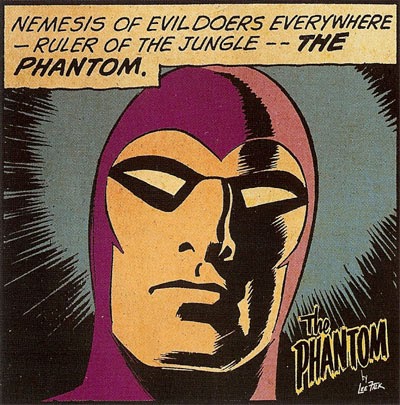 The concept of superheroes could be said to go back to ancient days, with Egyptian, Greek and Norse gods as predecessors, but the contemporary ones primarily appeared in the 1930s in the US. Many of them were created by young Jews, such as Lee Falk, partly as a reaction to the rise of anti-Semitism and the Nazis in Europe, who seemed to be unstoppable. Falk also created Mandrake, in 1934, who can be considered the first modern hero with supernatural powers. The most famous though was Superman, created in 1938 by Jerry Siegel and Joe Shuster. (In their first project from 1933 Superman was the villain of the story, aiming for world domination.) There are different kinds of superheroes, for example there are those that come from some place else, aliens like Superman; there are ordinary humans who, often through an accident, are given special powers, such as Spider-Man; and then there are those who have no superpowers but have created a myth around them, making it appear as if they are more than human, such as Batman or The Phantom. One of the earliest examples of this is Zorro, who did not originate in the world of comics but in so-called pulp fiction, and was created by Johnston McCully in 1919. The following year The Mark of Zorro (Fred Niblo 1920) was made, with Douglas Fairbanks in the title role, which helped make the character more widely known. The similarities between Zorro and Batman, created in 1939 by Bob Kane and Bill Finger, are obvious. They are both rich men pretending to be superficial and vain, Don Diego de la Vega and Bruce Wayne, who are also masked crime-fighters, bearing a personal grudge and fighting for justice and vengeance. Both Zorro and Batman were probably influenced by the tales of The Scarlet Pimpernel, a rich nobleman who under disguise works to save people from the guillotine in the bloody aftermath of the French revolution. He first appeared in a play in 1903 written by Emma Orczy that became a success and she wrote a number of books as sequels. In 1934 Leslie Howard played the lead in the film version, The Scarlet Pimpernel, produced by Alexander Korda and directed by Harold Young. 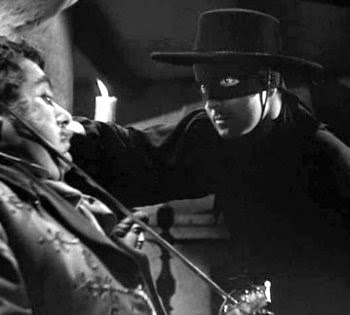 Tyrone Power as Zorro in Rouben Mamoulian's exquisite The Mark of Zorro (1940).

In the 1940s, 50s and 60s it was more common for superheroes to appear in TV-series than in films, such as Adventures of Superman that ran through the 1950s, with George Reeves as Superman, preceded by a low-budget feature film, Superman and the Mole Men (Lee Sholem 1951). In the 1970s there was a series with Wonder Woman, starring Lynda Carter. Then in 1978 the first "proper" feature film about Superman was made, directed by Richard Donner, and followed by three sequels in 1980, 1983 and 1987. The first one has its moments, but seems unsure as to whether it should be serious or ridiculous, and go off in different directions, and unfortunately Christopher Reeve is not particularly charismatic.

Superman (1978), the best part is the Malick-esque section of Clark Kent's childhood.

For the second film Richard Lester replaced Donner as director and it moved more firmly in the ridiculous direction, as did the others. In 2006 Warner Bros (who had successfully re-launched Batman, played by Michael Keaton and directed by Tim Burton, in 1989) tried to reboot Superman with Superman Returns, directed by Bryan Singer, but it did not lead anywhere and personally I felt it was overtly dull and self-conscious. But now Superman appears to be back with a vengeance after Man of Steel (Zack Snyder 2013), which might be the most successful Superman film to date, although for some reason all of the films about Superman have been disappointing. The best thing so far is probably this trailer for Man of Steel...

The films about Batman, both Burton's earlier ones and those made by Christopher Nolan in the last decade, have been much better and more interesting. Perhaps because Bruce Wayne/Batman is a more interesting character than Superman/Clark Kent, and because Burton and Nolan are better filmmakers.

The origins of the superheroes are often lost today, situated as they were in the fraught times of the 1930s, and it is a pity that this background is rarely acknowledged. It is also amusing that although it today is an American, all-male world, it began in the modern era with tales set in France after the French revolution and written by a Hungarian woman, exiled in Britain. The lack of female superheroes is often mentioned and it is disappointing that there are so few given their own movies, even though there are plenty of female characters to choose from. At the very least there should be a renewed effort to bring Modesty Blaise to the screen. Perhaps played by a dark-haired Keira Knightley?

There have been frequent attempts to analyse superheroes and their popularity, and why they are so popular "now". All of these efforts have by and large failed, partly because superheroes have been with us for over hundred years, so they do not necessarily illuminate our present condition, such as it is. And why should they not be popular? They are about heroes who are willing to sacrifice themselves so that those in danger can live and prosper. But whether the individual superhero film is successful or not primarily depends on the quality of it. There are as many failures as there are successes, but it is usually only the successful ones that are remembered and analysed.

Then of course there is this analysis provided by Bill in Kill Bill Vol. 2 (Quentin Tarantino 2004).