"It was no good - a lousy story, not well directed, not well anything."

Such was Henry Hathaway's view of his last film, Hangup (1974), which was released as Super Dude. It has never been available for home viewing as far as I know, and I had given up on being able to watch it, but it finally, miraculously, made itself available. (Hathaway has been a project for me for several years now.)

In the plot summary of the film on Wikipedia it says that "The film falls in the blaxploitation subgenre of 'vigilante group cleans up ghetto streets'. The film follows a black policeman seeking revenge on the man who got his girlfriend addicted to heroin." It turns out that neither of these things are exactly correct. There is no vigilante group involved, only the police, and while the main character Ken Ramsey is black, he is not strictly speaking a policeman but an undercover detective. He is working on a case to capture the local drug king and it is while working he meets the woman in question. She is already a drug addict and a prostitute when they meet, but it is the latter part that Ramsey cannot handle. 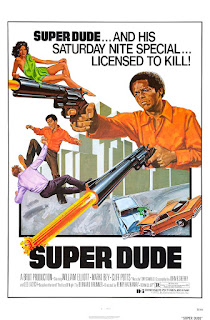 The best thing about the film is the music. It sounds like if it was by Lalo Schifrin, but it is by Tony Camillo. There are also some good action sequences and shootouts, where framing, camera placement and body movement works well, and where Hathaway shows that he can still direct. It is just that he does not seem to be able to deal with the actors. It is unclear what went wrong, but I can understand that Warner Bros. were reluctant to release it, as they were.

William Elliott plays the lead, the only time he did so. He was a musician, married to Dionne Warwick, and had done some TV, but he is not much of an actor. No one in the film gives a good or credible performance, although Roger Ebert disagrees with me. Elliott had another important role because when Warner Bros. would not release it, Elliott took it out of their hands and had it released through American International Pictures (AIP) instead. It seems it was they who pushed the blaxploitation angle, which included changing the title from Hangup to the more blaxploitation-like Super Dude. 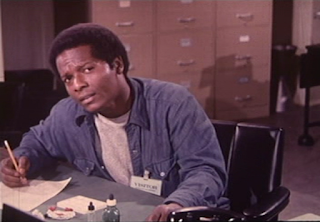 Today whenever Hangup is mentioned, which is rare, it is in connection with blaxploitation, which it is often considered to be an example of. The poster certainly gives it that vibe. In terms of plot, a black man fights and kills white criminals, and in terms of era, the first half of the 1970s, it is not unreasonable to make this connection, but it depends on your more precise definition. It is easy to imagine the same story, and the same director, but with a better cast and better dialogue, as a solid police thriller, one among many similar ones at the time. Hangup, which is matter-of-fact and casual, is not comparable to blaxploitation classics like Shaft (Gordon Parks 1971) or Foxy Brown (Jack Hill 1974), and would perhaps not be discussed as such if AIP had not pushed that angle and that new title Super Dude. It is more an indication of the desperation of the distributors than of its allegiance to blaxploitation. As it stands, Hangup will probably disappoint all prospective viewers, and those who want a blaxploitation film have much better films to choose from. I am tempted to re-watch one myself.

Now I have seen all of Hathaway's full-length feature films. Of the ten short B-movies he made at the start of his career in 1932-1934, I have seen only six so far and I am not sure to what extent the remaining four are available. If anyone should happen to know more, please let me know. The ones I have not seen are:

The plot summary on Wikipedia combines two sources, Addicted: The Myth and Menace of Drugs in Film by Jack Stevenson (2000) and What It Is, What It Was!: the Black Film Explosion of the '70s in Words and Pictures by Gerald Martinez, Diana Martínez and Andres Chavez (1998), and it is not clear whether anyone writing on it had seen it.

Links to all my previous posts on Hathaway: