British cinema of the 1950s is a lot more varied and interesting than it is given credit for, and among those doing good and steady work during the decade was Muriel Box. She was at the time the only woman who regularly directed films in Britain, and she was a successful writer as well. She even won an Oscar for the script for The Seventh Veil (Compton Bennett 1945), which she wrote with her husband Sydney. The two worked together for many years, and during the 1950s she directed at least one film every year. She was the only woman in British cinema before the 1980s who was able to do this. Wendy Toye directed feature films too, but only three during the 1950s and one in 1962.

Box was born in 1905 and her film career began as a continuity girl for British International Pictures. But her career as a writer was at first primarily for the theatre, even if she and Sydney wrote a script in 1935 for the film Alibi Inn, directed by Walter Tennyson. In 1941 she directed a short propaganda film, The English Inn, but it was not until after the war that the film career took off. She became the head of the script department at the studio Gainsborough Pictures, famous for melodramas and female-centred films, and for making a star of James Mason, usually playing the villain. She and Sydney wrote together and he produced, and after a few years she also began directing, after Gainsborough had been closed down.

If we include The Lost People (1949), on which she was co-director with Bernard Knowles, Box directed 14 feature films, with the last being Rattle of a Simple Man (1964). Most were produced by her husband and several were written by them, but she also directed other people's scripts. She did comedies, dramas and thrillers. In To Dorothy, a Son (1954), Shelley Winters plays the lead as an American woman going to Britain to protect her inheritance. Street Corner (1953) is a variation of the then popular British genre of police procedures but with the focus on women police officers.

The two films I want to focus on now are Simon and Laura (1955) and The Passionate Stranger (1957). The two films share the same basic premise, a fake re-enactment of reality with the fake and the real differentiated by one being in colour and the other in black and white. But the angles from which this is pursued differ. 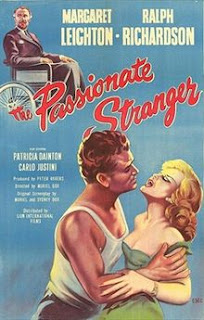 Simon and Laura is about a married couple who both are actors, no longer popular, and instead fighting all the time. A young upstart at BBC comes up with the idea of a daily reality show about a happily married couple and, after briefly considering "the Oliviers", decides to ask Simon and Laura. They say yes and have to fake being happy while the cameras are rolling. Their real life is in colour whereas the TV-version of their lives is in black and white. 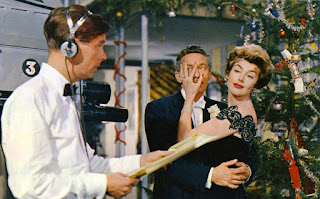 They are both satires, the first of television and the other of melodramatic novels (or storytelling in general), but they are also about fame and how easy it is to get confused about what is real and what is fiction, even when you are yourself a part of it.

Simon and Laura, which is the better film, was based on a hit play by Alan Melville and The Passionate Stranger was one of Muriel and Sydney's original scripts. The reason Simon and Laura is better is that it is quicker, wittier and more energetically played. Not just Peter Finch and Kay Kendall in the leads but the entire cast, including an obnoxious child actor played by Clive Parritt. (When Laura is asked about playing with a kid she is convinced it will be fine: "I have acted with octogenarians, dipsomaniacs, dope-fiends, amnesiacs, and veteran cars.")

For a film scholar it would be interesting to watch all of Box's films, as writer as well as director, and there is definitely a need for a book about her whole career and position within British cinema and the feminist movement. Judging by the films I have seen, she did not have a strong or imaginative visual style, but she had interesting ideas. And while you may not want to hunt down everything Box ever did, I definitely recommend Simon and Laura. It is delightful.