Defining this and that period as a "golden age" tend to get rather monotonous, as it is so common. But possibly the first period called a golden age is Swedish cinema in the late 1910s and early 1920s. On this there is some consensus. There is however no consensus about which years should be covered by it. There are at least two contenders: 1913-1924 or 1917-1924. Unfortunately, 1917-1924 seems to have the upper hand; unfortunately for Georg af Klercker. 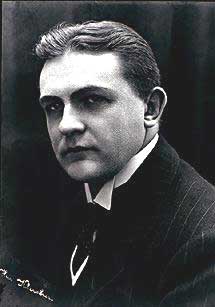 When Swedish silent cinema is discussed it is usually about Victor Sjöström and Mauritz Stiller, and films such as Terje Vigen (Sjöström 1917), Thomas Graal's Best Film (Stiller 1917), The Outlaw and His Wife (Sjöström 1918), The Treasure of Arne (Stiller 1919), Erotikon (Stiller 1920), The Phantom Carriage (Sjöström 1921) and The Saga of Gösta Berling (Stiller 1924). But there was a third man, frequently forgotten, and that was Georg af Klercker. One of the reasons he is not mentioned is that he had his best years 1915-1918, and then retired (sort of), and consequently he is not seen as part of the "golden age". And whereas Stiller and Sjöström were both in Stockholm at Charles Magnusson's vertically integrated company Svenska Bio, af Klercker made most of his films in Göteborg, at Hasselblad Fotografiska AB. But these are unfair reasons to keep him out of sight. If we instead keep to the wider span, 1913-1924, perhaps beginning with Sjöström's marvellous Ingeborg Holm (1913), af Klercker's oeuvre will be a natural part of that golden age. It is also a fact that initially Magnusson in 1912 hired all three of them, Stiller, Sjöström and af Klercker. They worked side by side for a few years before af Klercker left. Maybe if he had stayed on things would have been different.

He was born in Kristianstad, in the south of Sweden, in 1877 in a wealthy and aristocratic family. He enrolled in the military and became a lieutenant. and was consequently referred to as "lieutenant af Klercker" for the rest of his life, including by film critics. But he had artistic ambitions rather than military. More specifically, he had theatre ambitions, and began acting across Sweden and Finland. In 1911 af Klercker was employed by Dramaten (the Royal Dramatic Theatre) in Stockholm. It was from there that Magnusson lured him to his new studio on Lidingö, and made him head of production.

The first film af Klercker directed was as part of Magnusson and Svenska Bio's partnership with the Swedish arm of French company Pathé. Två bröder it was called and it was immediately banned by the Swedish film censorship board. His next film was The Last Performance/Dödsritten under cirkuskupolen (1912), which was released around the world and quite successfully so. It is partly lost, but what remains is not bad, and can be seen here:

He made several films in 1913 but then he became a part-time victim of the falling out between Svenska Bio and Pathé, as af Klercker was directing För fäderneslandet. It was finished in late 1913 but did not open until spring 1914, at which point af Klercker had left Svenska Bio for Pathé. He worked for them for a year and then he went to Hasselblad, where he was to get sole responsibility for the direction of their films. Hasselblad is today primarily known as a company that makes cutting edge cameras and photo equipment (popular at NASA, including on their lunar exhibitions) but it was not until 1941 they begun to manufacture by themselves. Before that they sold cameras, and for a while they also went into film production after they had began a cooperation with the distribution company Biograf AB Victoria. They called themselves Victorias Filmbyrå, and there af Klercker made almost 30 films, during a period of three years (half of them in 1916).

His films are a varied bunch, although thrillers and melodramas are the most common ones, and most of them have a very rich and evocative mise en scène and an imaginative use of deep focus. There is often an elaborate dynamic interplay between one level of action in the foreground and another level of action towards the back. (This was not unique for af Klercker but had become a recurring stylistic device at least since the early 1910s.) Working at Hasselblad gave him access to the most sophisticated cameras of the day, and he and his different cinematographers took advantage of the possibilities. But he was also good at directing actors, and with an eye for psychological realism. He also made the only Swedish film which seems to have been directly influenced by Louis Feuillade, Mysteriet natten till den 25:e (1917). It too was banned by the censors. Other highlights are Kärleken segrar (1916), I mörkrets bojor (1917) and Nattliga toner (1918).

1918 the film production unit at Hasselblad was sold off, and it merged with several other film companies. This new company was called Filmindustri AB Skandia, and it would the following year merge with Svenska Bio, becoming AB Svensk Filmindustri (SF), under the management of Nils Bouveng and Magnusson. So af Klercker might have been back working for him again, an idea which probably did not appeal to him. So instead he left filmmaking, briefly worked in the hotel business and then returned to the theatre. He left partly because he was tired of filmmaking, partly because his kind of films and filmmaking was considered old-fashioned, and it had become more difficult to sell them abroad, and to some extent because he was a victim of that era's perpetual mergers and acquisitions. But for a few years he was an equal to Sjöström and Stiller.

----------
In 1986 at the silent film festival at Pordenone there was a major af Klercker retrospective, and it did serve as a reminder to critics and scholars of his importance. There is also a book-length study of his films by Astrid Söderbergh Widding: Stumfilm i brytningstid - Stil och berättande i Georg af Klerckers filmer (1998).

Ingmar Bergman was a huge admirer of af Klercker and in 1995 he made a TV-film about him and Charles Magnusson, called Sista skriket/The Last Gasp. It is very good. Here is a page from the manuscript.

Two of his films that I have not seen but that look particularly intriguing are Nattens barn (1916) and Mellan liv och död (1917).
Upplagd av Fredrik Gustafsson kl. 09:00