This is an unscheduled post, part of a number of posts published today about The Man from U.N.C.L.E. Links to the other posts to be found at the end. My next post will be Friday next week as usual.

On occasion I watched the TV-series The Man from U.N.C.L.E. when I was a kid, as it was often broadcast at odd hours. I was never much of a fan, but it did have some appeal to me. I have at times tried to watch again, now, as an adult, with limited success. It has been hard to come by, not even YouTube is forthcoming. I think my main interest in it back then was that Ian Fleming was involved in its creation. But it was also a twist to see an American agent, Napoleon Solo (Robert Vaughn), and a Russian agent, Illya Kuryakin (David McCallum), working together under the United Nation's flag (sort of) at the height of the cold war. (It is called The Man from U.N.C.L.E. instead of The Men from U.N.C.L.E. because originally it was only meant to be about Solo. But Kuryakin became so popular with the TV-audience that the part was expanded to become equal to Solo.)

The new film, directed, and co-produced and co-written, by Guy Ritchie has none of the topicality of the original series, and it is rather silly and shallow, but fortunately it also has oodles of laid-back wit and it is rather cool at times. There were some action sequences that had plenty of panache, but I especially enjoyed the scene in a fashionable clothes store where the two male agents have a debate about whether this particular belt go with that particular dress, and whether colours match on the outfits to be worn by the female agent. With the name dropping of fashion labels and the confidence with which they speak of such matters, they would not be out of place in a 1963 version of Sex and the City. Both Henry Cavill (as Solo) and Armie Hammer (as Kuryakin) seemed to have a good time, and they had chemistry. Hugh Grant was also a treat, in the part played by Leo G. Carroll in the series. Elizabeth Debicki as the master villain was also great. But for some reason Alicia Vikander did not seem to fit in. It was not that she was bad and she did manage to look as stylish as Audrey Hepburn at times, one especially fun scene was when she was dancing in pyjamas and sun classes, but while all the other worked well together, and had a connection, she seemed to be at a distance. Participating in the activities but not really being there, perhaps thinking about something else. Aloof. 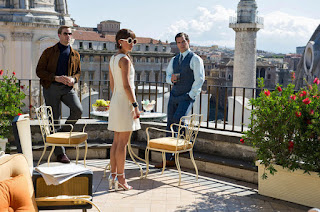 The dynamic duo and Ms. Vikander.

So I did have fun will watching The Man from U.N.C.L.E. but I was also annoyed at times. For example the last car chase, on an island, was overblown and weird, with no sense of spatial awareness. The film varied from sequence to sequence, and from the delightful and inspired to the awkward and off-putting.

It is not immediately obvious why there is a film based on this particular series. Back then it had some impact but that was a long time ago, and unlike Mission Impossible, which first came out as a series around the same time as U.N.C.L.E., it has not left any well-known quotes or famous music behind. I suspect that the kids these days have not even heard of it. Perhaps this is why it has been kicked around for quite a while, with several different directors attached to it and then un-attached. One of them was Steven Soderbergh and I can see why he might have been attracted to it, and, actually, the finished film did remind me at times of Soderbergh. While Ritchie is nowhere near as good, or as important, as a filmmaker he is in some ways similar, but less nimble and intelligent. He is more draught beer and Soderbergh more vintage wine. (Soderbergh also has a more serious edge and capable of making films with a depth which Ritchie does not seem to have any interest in.) But with U.N.C.L.E. Ritchie comes closer to Soderbergh than before in the feel of the film. And like Soderbergh's Oceans 11, 12 and 13, The Man from U.N.C.L.E. is primarily interested in digressions. It is not that they have lost the plot; there was never any interest in actually having a plot.

After Lock, Stock and Two Smoking Barrels (1998), the only one of Ritchie's films I have really liked is Sherlock Holmes - A Game of Shadows (2011). The U.N.C.L.E.-film made me wonder if he wants to make a Bond movie (Henry Cavill played Solo in a way that might have pleased Ian Fleming) but I hope he never does. Although I suppose he would not do a worse job than Lewis Gilbert did.