This week's post is today on Wednesday instead of Friday, for community reasons, and it is a review of one of the two Australian films out now (a rare occurrence).

The best part of The Water Diviner (Russell Crowe 2014) is the beginning, a long wordless sequence when the main character Joshua Connor, played by Crowe, looks for water with his dog, and when he finds a suitable spot he begins to dig, deep into the ground, until he eventually finds it. As this is in rural Australia, and it rarely rains, his ability to find water is a necessary survival skill. This survival skill will also be necessary when he, in 1919, travels from Australia to Turkey to find out what happened to his sons who went to Europe to fight in the First World War. Or rather, to find their bodies and bring them home, since in all likelihood they have all been killed.

This is the story that Russell Crowe has chosen for his first film as a director, a story that is a quintessential Australian story as the First World War and the catastrophic battle at Gallipoli, or the battle of Çanakkale, in 1915, has become, as I have said in an earlier post, a central part of Australia's idea of itself. So The Water Diviner can be seen as a continuation of the story that Peter Weir told in Gallipoli (1981). That was about the going to war, and going through war, this is about the aftermath, of the British and the Australians, together with the Turks, coming to terms with the losses, finding and burying the dead. It is a grisly job. And Joshua Connor wants to be a part of it, to personally look for the remains of his sons. Hughes, the British officer in charge asks the Turkish officer, Captain Hasan, why they should help Connor. "Because of all the fathers, he is the only one who came looking." Hasan answers, in the most moving line in the film. 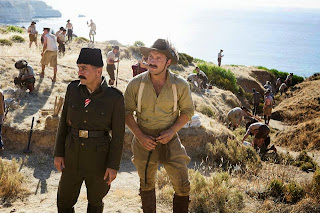 The scope and ambitions of The Water Diviner are impressive, and covers war, remembrance, imperialism, empires, the foundation of modern Turkey, and reconciliation and forgiveness. Turkey and Australia may have been enemies in the war, but in peace the shared costs make them friends, and not only does Connor and Hasan, form a deep bond, but Connor also falls in love with Ayshe; a Turkish woman, a war widow, and as such initially hostile to Australians such as Connor.

So there are important themes here, and a humanistic message, which is however undermined by the fact that the Greek, with whom Turkey is at war with, are portrayed as pure evil. Considering the Turks had just slaughtered over a million Armenians it is not clear why Greece is singled out in this way. Australia is also criticised, and the British, but they are not demonised as the Greeks are. The Turks are not criticised at all, it seems, only the male chauvinism of Ayshe's brother-in-law. I am not excusing the Greek, they too have a habit of behaving badly, but it seems unfair that they are singled out as uniquely evil. When the Turks pushed back the Greeks there were plenty of atrocities, such as the burning down of Smyrna (now Ízmir) by the Turks in 1922. But that is not mentioned in the film, this is to some extent the Turkish version of events. But it is still remarkable how much the film does engage with several of the geopolitical events at the time, although even for me, who has some knowledge of the history, the film was frequently confusing as so much was only alluded to, or abruptly introduced.

As a director Crowe manages the visual aspects rather well, and there are many impressively shot and staged scenes, but there is also a tendency to visual clichés, both in colour grading and landscapes. Worse though are the frequent errors of judgement both when it comes to the pacing and when it comes to the sentimentality. Some scenes were just plain embarrassing, such as the one in which Connor, Ayshe and her cute son splash water on each other in slow motion. In fact the whole romance between the two, although meaningful for its message of forgiveness and bonding between two countries and two religions, was handled in a clumsy and forced way, and with a rather manly perspective. The growing friendship between Connor and Hasan, played with quiet conviction by Yilmaz Erdogan, was handled much better. Their friendship was convincing, and more profound. There was real beauty there; in the relationship between Ayshe and Connor there was only sentimentality. It does not help that Olga Kurylenko, who plays Ayshe, is unable to add depth or flesh out the character. But she, and the other Turkish characters, at least Turkish with each other and English only with Connor. 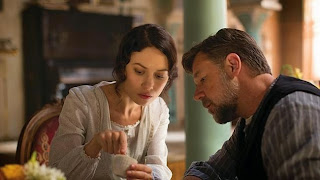 The Water Diviner is not a great film, but for all its flaws it is still a commendable effort to teach forgiveness and tolerance. Had the Greeks been left out of the picture, and had there been a better actress than Kurylenko and a surer grasp of pacing and editing, it might even have been a great film.

The other Australian film out now is of course Mad Max Fury Road (George Miller 2015). I like that one more than The Water Diviner, in fact on occasion I was almost jumping up and down in my seat.
Upplagd av Fredrik Gustafsson kl. 06:00