The Grand Budapest Hotel and fascism, then and now

The line, spoken towards the end of The Grand Budapest Hotel, sums up almost everything the film stands for, and wants to put across; that there are people who are kind, helpful and vivacious yet they are shot and killed by those who are neither, the fascists, the Nazis, the violent and hateful of this world. Those who, unfortunately, often have both the power and the means to shoot and kill, and to get away with it. Death has always been a part of Wes Anderson's films, think of the dog in Moonrise Kingdom (2012), the alleged son, played by Owen Wilson, in The Life Aquatic of Steve Zissou (2004), the rat in The Amazing Mr Fox (2009), the child who drowns in Darjeeling Limited (2007), and life is generally presented as being a series of disappointments, disappointments that begin to accumulate at an early age. But in The Grand Budapest Hotel those aspects are heightened and darkened. There is a palpable dread here that is new.

But it is not surprising, because the world in general is filled with dread. The 1930s might seem very distant but it is only a couple of weeks since Russia annexed Crimea, a part of the Ukraine, and six years after Russia went to war with Georgia. It could be called the latest fallout from the end of the cold war (15 years after the wars in Yugoslavia ended), and now a full scale civil war, and potentially a real war between Russia and the Ukraine, is a very real fear, in the middle of Europe, close to the fictional country Zubrowka in which The Grand Budapest Hotel takes place. That is not something Anderson was aware of when he made the film of course, it was finished before the Ukraine erupted. But Europe is filled with enough problems of economic hardship, isolationism and rising intolerance against immigrants (wherever they are from), Jews and Muslims, and others. In many countries political violence, whether from fascists, regular Nazis (the third largest party in Greece is the neo-Nazi Golden Dawn) or various assorted left-wing extremists, is not only a regular occurrence but increasing as well. In some countries, especially Hungary and Turkey, democracy is even threatened or disregarded by the government itself. Many of these groups, and many politicians as well, also look favourably upon Putin, the Russian president, as a strong leader who "get things done" and is standing up against "the gay agenda" (homophobia is something that unites many of these groups and parties, but not all of them) or whatever devious things they feel that Europe is about. That is peculiar because Putin is not really getting much done domestically, other than overseeing widespread corruption, violence and harassment. Of course, if being "a strong leader" means "bullying and invading weak neighbouring states that cannot defend themselves" then yes, Putin is a strong leader. But it is not exactly the kind of behaviour that is worthy of admiration. 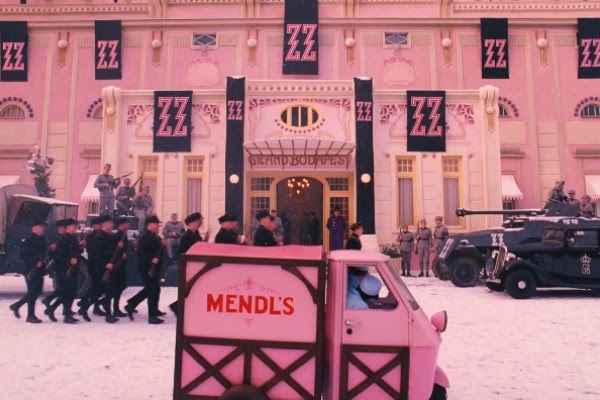 So there have for several years been a lot of worrying, scary and appalling things going on in Europe, and Anderson's film, while set primarily in the early 1930s, speaks to that, and does it very well. He does it with a combination of terror and laughter, neatly combined in a scene towards the end in which a number of Nazis start shooting at each other in a hotel, without any sense or order, without knowing at what they are shooting or why.

Space is always important for Anderson, a space created from scratch, unique for each film but at the same time consistently Andersonian, and here Anderson has not only created a particular space but a particular time as well, a Mitteleuropa not seen since the days of Ernst Lubitsch, and it is lovingly recreated with his customary zeal. But it is also a world that is destroyed. This is a fantasy world, and it cannot continue. Anderson does not have any illusions about the reality of the situation, or of it being a fantasy. In the end it is said about the film's main character Gustave H. that "To be frank, I think his world had vanished long before he ever entered it - but, I will say: he certainly sustained the illusion with a marvellous grace!" and that is something Anderson is aware of. It could also be Anderson commenting upon Stefan Zweig, the Austrian writer that was an inspiration for The Grand Budapest Hotel, and who wrote the magnificent The World of Yesterday just before he killed himself in 1942.

But if that world is an illusion, the threat is not, it is very real. And so it is in Europe of today. Once in the beginning of the film and once towards the end Gustave H. and Zero Moustafa travel on a train that suddenly comes to an unexpected stop. "Why are we stopping in the middle of a barley field?" Gustave asks the first time. The second time Moustafa asks the same question. The answer is that the people of violence and hate can strike whenever, wherever. Even in the middle of a barley field; then and now.
Upplagd av Fredrik Gustafsson kl. 09:00