I have sometimes been accused of being anti-theory. I can understand why, considering I have criticised, sometimes venomously, most flawed theory I have come across ever since my undergraduate days. But that is not the whole picture. While being impatient with bad theory there are theories I like and I have also developed some theories of my own, for example on lighting, on queer characters in post-war cinema, on our relationship to storytelling and on how we appreciate films. My post using Max Weber to discuss the way we approach film history can also be said to be a theory. So I am not anti-theory. There are plenty of things that are very good and even inspiring, like reading Jean Epstein ("The cinematic feeling is therefore particularly intense. More than anything else, the close-up releases it. Although we are not dandies, all of us are or are becoming blasé. Art takes to the warpath."). But there are others I like as well, and I have written a lot about André Bazin (most recent post here).

When I say bad theory I mean for example theories that are too speculative to be useful, theories that proclaim to be true for all films or are based on the assumption that everybody in the audience will react in the same way, as if such a thing was possible, or theories that are based on misconceptions or misunderstandings on how films are made and/or how they work. A lot of theories also seem to be by disillusioned Marxists wondering why the promised revolution never appeared and putting the blame on popular cinema, or popular culture in general. (The function of many theories also seems to be to advance the career of the theorist rather than to say anything illuminating about film.)

Three years ago I wrote a post on some problems with the film theory canon, how texts are too often treated like gospel when they might more accurately be considered a sign of their time; not necessarily saying anything meaningful about cinema. Sometimes the person who wrote a particular piece has moved on and might even be embarrassed by the ideas put forward at a younger age. Writing is often done in haste, perhaps against a deadline, and there is not always time to think through what one is saying. It also often happens that one might be caught up in an idea without considering if it actually works, or makes sense, or whether it is contradicting another point one has already made. When reading a theoretical text (any text) these are things to consider. It also often happens that theories are based on the writer's memories of the films under discussion, memories that are not to be trusted. In Laura Mulvey's Visual Pleasure in Narrative Cinema many of her descriptions are wrong, i.e. what she says happens in the films do not actually happen. Whether such mistakes are important or not in a general sense is debatable, but they might undermine the arguments made.

There is another thing to remember and that is that famous texts and ideas are often oversimplified and/or misunderstood and/or undermined even by the friends and followers of the theory. When Deleuzians are explaining the movement-image and the time-image they usually say "The movement-image is classical Hollywood and the time-image is post-war European art cinema." But that is not really what Deleuze is arguing. They might as well explain it by saying "The movement-image is French poetic realism and the time-image is Hollywood films by, for example, Orson Welles and Joseph L. Mankiewicz." which is as correct as the previous summary, but also equally narrow. The reason they chose the former explanation instead of the latter is probably because they do not really accept Deleuze's distinction and try to make it more in line with their own preferences. 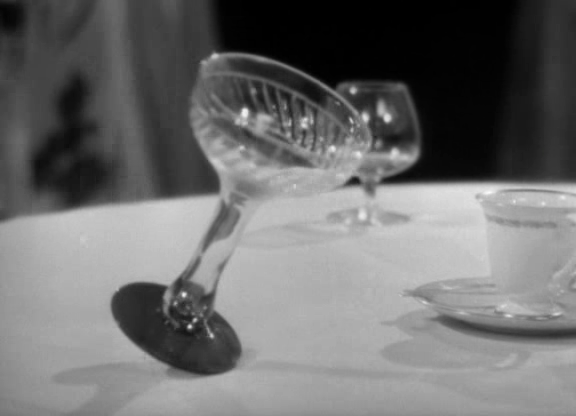 The crystal-image. A Letter to Three Wives (Joseph L. Mankiewicz 1949).

When theoretical texts are discussed or criticised it is usually through the use of another theory, on whether it contradicts or agrees with some other text. But that is not really critical thinking, that is compare and contrast. For me it is when a text is criticised on its own terms, from within, that it becomes interesting and meaningful,  Under the heading "Theory readings" I aim to engage with some theoretical writings (loosely defined) on their own terms, and see where that will take me. The first one, published soon, will be about Robert Warshow and in particular his essay The Gangster as Tragic Hero.