I have been challenged to do a post on nightmares and film. Naturally that made me think of Hitchcock and Vincente Minnelli and I wanted to show the nightmare scene from Minnelli's The Father of the Bride (1950), but I was not able to find it. Here is a still image though: 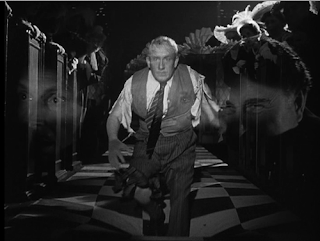 A good thing about dream sequences is that they give the filmmakers the space and ability to let go of their inhibitions. John Frankenheimer, when he was at his best in the 1960s, letting his paranoia run loose, made for example The Manchurian Candidate (1962) and Seconds (1966) where the borders between nightmares and reality become blurred. Roman Polanski is another nightmare master. Akira Kurosawa has made some impressive ones too. Hasse Ekman did some great nightmare scenes in The White Cat (Den vita katten 1950). The most famous dream sequences of Hitchcock are from Spellbound (1945) and Vertigo (1958). Here is Vertigo:

And here is Spellbound, where Salvador Dalí designed the dream. There was to have been ants involved, crawling on Ingrid Bergman, but that was considered too much (you can see Dali's ants in Un Chien Andalou (Luis Buñuel and Dalí 1928) instead):

Nightmare sequences were common in 1940s postwar cinema, not least in Hollywood where Sigmund Freud was popular. In this clip from another film by the ever self-conscious Hitchcock, Marnie (1964), they even talk about that. It is not a dream sequence but a post-dream sequence, with Marnie and Mark discussing her nightmares and fears:

Ingmar Bergman was also keen on dreams and nightmares, with some films being almost entirely nightmarish like Hour of the Wolf (1968). But my favourite dream sequence of his is from Wild Strawberries (1957):

The final clip today is from the British horror film Dead of Night (co-directed by Cavalcanti, Dearden, Hamer and Crichton 1945). If you see the entire film you will never be able to relax in a room with a doll.

Common mistake, I had written a superfluous "The" for the title of Bergman's Hour of the Wolf. It is gone now.
Upplagd av Fredrik Gustafsson kl. 13:18